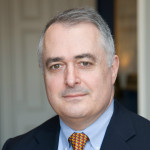 Dr. Charles L. Flynn, Jr., is the President of the College of Mount Saint Vincent. He was appointed to the position in 2000.

Originally from Connecticut, Dr. Flynn received a B.A. from Hamilton College, and the M.A. and Ph.D. from Duke University. He is a member of Phi Beta Kappa.

A historian, Dr. Flynn is the author of White Land, Black Labor: Caste and Class in Late Nineteenth Century Georgia. He is co-editor of an award-winning volume entitled Race, Class, and Politics in Southern History, and the author of numerous articles.

The office welcomes questions and concerns at president@mountsaintvincent.edu.

The Office of Public Relations can best respond to calls from media.