Mobile Dropdown Button
Home / Admission / Visit the Mount / Campus Tours / Meet Current Students / What’s It Like Being a Nursing Major during a Pandemic?

What’s It Like Being a Nursing Major during a Pandemic?

Let’s Talk About it. First, I’ll start by introducing myself⁠—my name is Ashley Budhu and I’m a 20-year-old full-time student studying at the College of Mount Saint Vincent. I am currently majoring in nursing and minoring in sociology. I say currently cautiously because I have changed my major more than the average student. I don’t feel bad about it because we’re all indecisive in some ways. For example, if it takes you thirty minutes to pick a movie to watch on Netflix, I’m sure it’ll take you quite a bit of time to pick a career that you’re going to be stuck in forever. 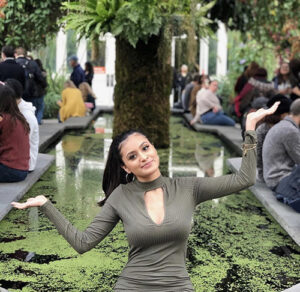 To make a long story short, I came to CMSV as a biology major, switched my major to sociology, and then finally decided on nursing. This isn’t about how I found my way to an emotionally fulfilling major. It’s about how I handled the constant reminder that when there is a crucial health crisis nurses are undoubtedly the first responders. You may be reading this like “yeah, I’m confused you didn’t know that?”

The answer to your question is yes, I did, but everything became so much more real once the pandemic kicked in. Let me explain. Now, I want to reflect on the last day I had on campus before we had to abruptly move out.

I remember it being late in the evening when the CMSV community received an email to evacuate the dorms due to the coronavirus outbreak. I like to call this part the “calm before the storm” because at first, I really wasn’t worried. I was actually pretty delighted because like any other student, I was in the middle of midterms and thought “this will pass and so will I, but later.” At this time, I was surrounded by people who had the same mindset. Therefore, in the moment everything was okay. Boy, did I fool myself.

Twenty minutes later, I was packing all of my clothes into a suitcase and telling my roommate that we’re never coming back to school. I received numerous phone calls within those twenty minutes and one of those calls were from my mom. My mom was dedicated to the news and I could’ve been talking to News 12: The Bronx itself with all the information she was giving me. She was panicking⁠—telling me that schools are going to be shut down for the rest of the year, take an Uber home as soon as I can, and sanitize everything! Seeing as I’ve lived with my
mom for most of my life, I assumed that she was overreacting. That is until I got a call from one of my closest friends on campus.

Before I get into it, these are some important facts that you should know about my friend. She’s always been vigilant when it comes to cleanliness—vigilant to the point where she needs to Lysol disinfect her bed anytime someone sits on it. She also watches the news every morning to be aware of what’s happening in the world. Keeping this in mind, I wasn’t surprised by her call, but I was anxious about what she had to say. She told me about what her friends heard and then she told me about what her friends’ friends heard. After back-and-forth phone calls, I came to the conclusion that you were either freaking out about this or you weren’t.

With that being said, I took it upon myself to stay cool, calm, and collected. I unpacked all of my clothes and only packed things that I needed for the break. I knew things were starting to get really bad when I had to cancel my vacation and all the classes were being held online. As a nursing major, I felt like the best way to learn is through clinical experience, especially since that was the only patient care that I was exposed to. With the pandemic spreading, clinicals were eventually canceled. The more I listened to the media coverage, I realized that many cases popped up in the hospital that my peers and I were training at.

This made me nervous and with all the external anxiety from my mom and everyone else around me, I was scared. The more I thought about it, I realized that getting exposed and putting your life on the line for a complete stranger is just a part of the job description. Thoughts like “why am I doing this?” and “do I really want to become a nurse to help others or do I have some sort of savior complex?” kept popping in my head. Billboards around New York read “Nurses Are Heroes” and “Thank You Nurses.” Seeing these signs made me feel uneasy because I don’t know if I’m ready to be a hero. This was my self-doubt taking over, but I realized that self-doubt doesn’t equate to my level of competency or my work ethic.

The pandemic struck the hearts of even the strongest individuals that I know. Manifestations of mental illness or neglect became more prominent during this time. Signs of anxiety and depression became more apparent. These were circumstances that any normal person dealt with during these times. I thought to myself “these are trying times for everyone, therefore, why do I think I’m immune to the effects of these circumstances?” Then it hit me; I’m not.

If there was any other time to question my career choice, it’s now. The amount of pressure and fear that I placed upon myself made complete sense. We’re living in a time where health care providers are gaining the most attention and respect for their work. Living up to the expectations that the world has placed upon us feels somewhat like a burden. Being overwhelmed is normal, overthinking is normal, and eventually the situation that you’ve put yourself in will diffuse itself.

The reality is that it is not easy being a nursing major during this pandemic, but overcoming internal battles is not impossible. My intention is not to deter anyone from becoming a nurse, but it is how my mind processes things during this time. You are not alone. Keep fighting the part of yourself that wants to stop fighting.

I know that in a year or two, after getting my Bachelors in Nursing, I will feel a new sense of empowerment to continue to help others and start my journey of healing. Mount Saint Vincent’s mission statement states “we foster an understanding of our common humanity, a commitment to human dignity, and a full appreciation of our obligations to each other.” As a nursing major, I recognize this statement as a form of encouragement to keep striving to serve others with compassion, empathy, and strength; don’t give up.