A Peek Inside Dr. Visviki’s Lab

Genetics, Lifestyle, and Longevity: Lessons from the Sisters and the Mount’s Next Generation of Scientists

Ioanna Visviki, Ph.D., Ad Lux Professor of Biology, is a scientist to her core. The evolutionary biologist and researcher has several grants and publications to her credit, including her latest paper, published during the height of the pandemic, on the effects of arsenic on aquatic biota.

But her master work is studying longevity—that, and preparing the next generation of scientists.

For some time now, Dr. Visviki has been studying the biological and socioeconomic factors that affect human longevity, working with what some scientists might consider an ideal population: members of the religious order, the Sisters of Charity of New York, who were born during the 19th century.

“Human studies can be affected by many confounding factors, and it’s difficult to control for those factors,” Dr. Visviki explains. The Sisters of Charity comprise a singular population where confounding factors are minimized. The majority are white females, mostly of Irish descent, who did not reproduce and joined the religious order early in their lives. “They have similar diets, routines, and levels of activity,” she says. “In some ways, they form a model subject pool.”

Dr. Visviki is investigating the role played by immigration, family size, childhood socioeconomic status, education, adult profession, and birth cohort on longevity. She hopes the data she is compiling will reveal new insights into aging well. At her side and acting as her research associate for the study is Catrina Estrella, an honors undergraduate student majoring in biology with a minor in Philippine studies, who is on the pre-med track. The two met during Catrina’s freshman year in a general biology class. Right from the start, the professor recognized the makings of a future scientist.

“When I take on a student researcher, the first thing I look for is inquisitiveness, a thirst for knowledge,” she says. Catrina had that quality and more, and it wasn’t long before Dr. Visviki invited her to join the research team. By the summer following her junior year, Catrina had been accepted to a highly competitive summer internship program at the renowned Argonne National Research Laboratory in Illinois.

The internship, a program of the Minority Serving Institutions Partnership Program (MSIPP), is designed to provide an enhanced training environment for next generation scientists. Catrina spent ten weeks fully immersed in the world of the professional researcher, working alongside a multidisciplinary group from academic and government laboratories as she examined the effects of microplastics on aquatic organisms. “It’s a wonderful program that allows undergraduates an opportunity to develop the skills and connections they will need if they are planning a research career,” says Visviki.

And what qualities does Dr. Visviki try to cultivate in her students?

“I look for an innate curiosity about the workings of the world we live in and I look for a strong work ethic. This work is hard, and the ability to stick with something even when it gets frustrating or goes in an unexpected direction is crucial.”

She also encourages all her students to go where their curiosity leads them.

Last spring Catrina and another student, Shama Mughal, gave a prize-winning poster presentation at the Beta-Beta-Beta (Tri-Beta) Northeast Region 1 District Convention held at Elmira College in upstate New York. The conference allows undergraduate student researchers to mingle with fellow scientists from all over the Northeastern U.S., presenting and discussing their research. The two Mount students placed third with their poster, Birth Cohort, Education, and Longevity in a 19th Century Catholic Order. “Working with human subjects is very unusual for undergraduate researchers, so the conference was a wonderful way for Catrina and Shama to continue maturing as scientists and to be recognized for their work.” 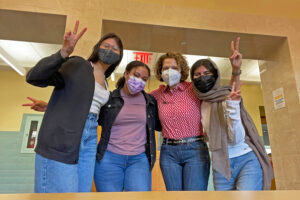 Former students often keep in touch long after they leave Dr. Visviki’s lab, and many go on to careers in the sciences. “Mount graduates are usually competing with candidates from larger institutions, but they stand out,” she asserts. “Prestigious programs in this area know they can rely on our graduates who are rigorously trained, well organized, and ready to work, right from the first day.”

Their success illustrates her point: “Undergraduate research opens up a different way of thinking. In the lab, students learn how to think like scientists. In many ways, scientific training is like an apprenticeship.”