Election 2016 – Americans’ Views on the Election Process and Campaign Funding

There is growing dissatisfaction with the American process of electing a president and strong support for efforts to rein in the power of money on campaigns.

In the latest national poll conducted by the Fishlinger Center for Public Policy Research at the College of Mount Saint Vincent, there was considerable consensus with few partisan differences regarding campaign finance or voter laws.

Much of the growth in dissatisfaction appears to have come from voters who preferred Bernie Sanders. Only 14 percent of Mr. Sanders’ supporters are satisfied, down from 27 percent before the primaries. And 55 percent are not satisfied with the electoral process, up from 46 percent before the nominating contests began.

Americans are most concerned with the candidates’ stances on issues and their individual characteristics. Fifty-five percent expect the debates between the major party candidates this fall to be a major factor in their decision. Less than half consider the primary debates or results as important factors in their vote choice. Only about 4 in 10 say the source of a candidate’s funding is extremely or very important. And fewer consider media coverage or advertising to be important. 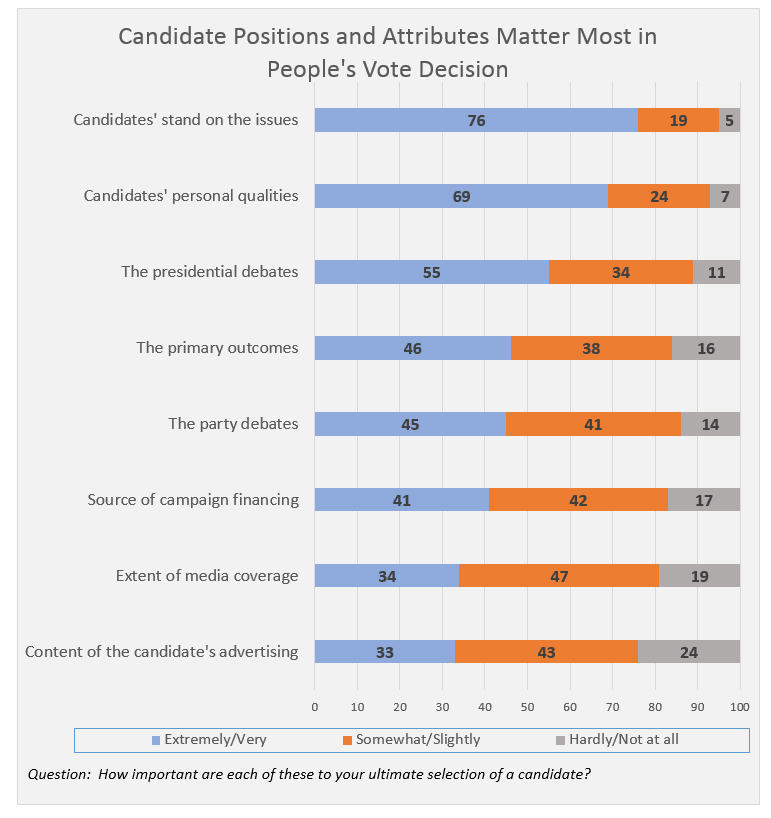 While the public does not weigh the source of a candidate’s campaign funds very heavily in their vote decision, most Americans support efforts to reduce the power of special interests in politics.

In order to limit the influence of special interests, nearly 9 in 10 support increasing the requirements to disclose political contributions and 8 in 10 Americans favor reducing the amount an individual can donate to a candidate.  About 6 in 10 report backing the idea of public funding of elections. 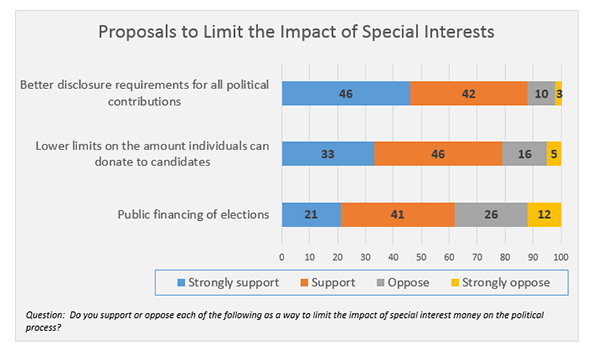 The Bipartisan Campaign Reform Act of 2002, often referred to by the names of its sponsors, Republican Sen. John McCain of Arizona and former Sen. Russell Feingold of Wisconsin, limited the use of corporate and union money to fund advertising on political issues. It was struck down by the Supreme Court on constitutional grounds in 2010 in the Citizens United v. Federal Election Commission decision.

Under the Supreme Court’s Citizens United decision, political spending is protected under the First Amendment, meaning corporations and unions can spend unlimited amounts of money on political activities, as long as it is done independently of a party or candidate.

Most Americans would support legislation to restore limits on campaign spending by corporations or unions. And most oppose unlimited spending by Super PACs. 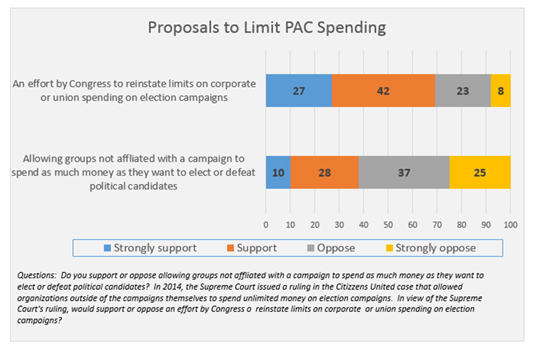 Campaign finance reform is an issue with much agreement across the political divide. There is little difference in support, regardless of party identification, for limiting contributions and increasing disclosure.

Some minor partisan differences are noted regarding the public financing of campaigns. About 6 in 10 Republicans and independents would like to see political campaigns underwritten by the public; more than 7 in 10 Democrats agree.

Independents are slightly more likely than Republicans or Democrats to take a dim view of Super PACs. A Super PAC is a type of PAC that may not make contributions directly to a candidate or political party, but can spend unlimited funds independently. Unlike traditional PACs, there is no limit on the size of donations to Super PACs, and much it is from corporations legally protected from public disclosure. 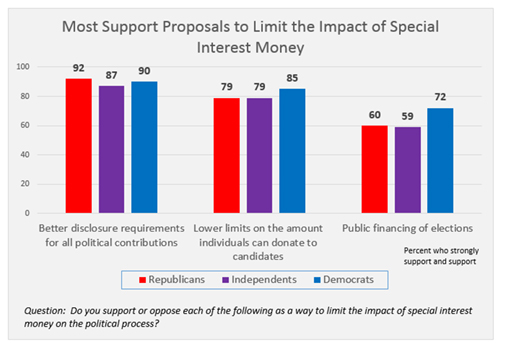 Nearly 6 in 10 Democrats and Republicans oppose the ability of groups unaffiliated with a campaign to spend unlimited funding to help, along with nearly 7 in 10 independents.

And Democrats are somewhat more disposed than other Americans to overturn the Citizens United ruling. About two-thirds of Republicans and independents support legislative efforts to reinstate limits on the spending by corporations and union spending on political campaigns. And three-quarters of Democrats favor Congressional action to oppose the Citizens United decision.

Recently, voter identification and proof-of-citizenship laws have been ruled against in Kansas, North Carolina, North Dakota, Texas and Wisconsin. The legal landscape is still shifting, and some of these decisions could be reversed by higher courts.

The poll, which offered arguments for and against laws that require voters to show photo identification before voting, found large support for such laws. Seventy-five percent said they supported the laws that “help combat voter irregularities and fraud.” Election law experts note there has been no significant evidence of voter fraud. On the other hand, 25 percent opposed voter ID laws because they “reduce turnout and disenfranchise youth as well as ethnic and racial minority voters.”

Most Americans also support a proposal from the other side of the political spectrum: same-day registration. The ability to register to vote on Election Day is supported by 63 percent, who agree that the laws help increase participation in elections.  This view is confirmed by official turnout data which indicates that voter turnout is higher in states that allow same-day registration. Same day registration is opposed by 37 percent who agree that the laws increase the likelihood of voting irregularities and fraud.

The fieldwork for the Fishlinger Center Poll was conducted using a blended national Survey Sampling Inc. panel. Online interviews were conducted with 1,000 adults January 4 to 25, 2016 and 1,000 adults June 8 to July 5, 2016. The survey has a credibility interval of plus or minus 3.5 percentage points. The credibility interval may be larger for sub-groups. The poll is subject to other potential sources of error including, but not limited to coverage and measurement error. Data were rim weighted to match the national population on age, sex, Hispanic origin and race. Question wording and topline results are available at fishlingercenter@mountsaintvincent.edu.