Election 2016 – Americans View the Candidates: Are They Qualified, Likable, Honest?

Prior to the primaries, Hillary Clinton was viewed as the most qualified candidate for president according to the latest nationwide poll conducted by the Fishlinger Center for Public Policy Research at the College of Mount Saint Vincent.  However, Americans have doubts about her honesty and integrity.

Overall, there are strong partisan differences in how the candidates are viewed.  Forty-five percent of Republicans regard Donald Trump as honest; only 18 percent of Democrats agree.  About 4 in 10 Democrats say Senator Bernie Sanders is likeable, as do about half many Republicans.

The poll was conducted last month, before the Iowa caucuses and New Hampshire primaries were held.

Which Candidates are Qualified to be U.S. President? 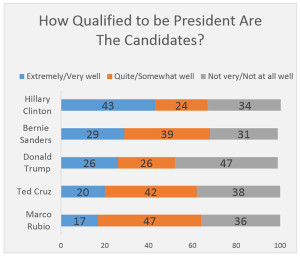 Three in 10 (29 percent) independents say Mr. Trump is qualified; 43 percent say he is not very or not at all qualified.  Independents are also less positive about the credentials of Mr. Cruz and Mr. Rubio.    Only about 15 percent regard either man as especially qualified, while more than a third regard them both as unqualified.

Mrs. Clinton has had problems for many years with perceptions of her trustworthiness.  In recent years, the controversy over her email use while Secretary of State and the Congressional investigation in the attack on the U.S. consulate in Benghazi has taken a toll. And while she was First Lady, controversies included investigations into the Whitewater real estate investments.

But the public sees Mr. Sanders as more trustworthy than Politifact. Forty-two percent of Democrats say Mr. Sanders is extremely or very trustworthy, similar to the 45 percent who say the same about Mrs. Clinton.  But only 22 percent of Republicans and 25 percent of independents (15 percent) agree. 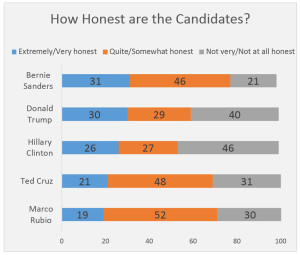 Again, the public has a generally somewhat less negative impression of the Republicans’ honesty than Politifact. While most Democrats (62 percent) say Mr. Trump is not very or not at all honest, only 19 percent of Republicans and 35 percent of independents agree.   Also, few Republicans doubt the trustworthiness of either Mr. Cruz or Mr. Rubio.  Among Democrats, 40 percent say Mr. Cruz is not honest and 35 percent say that 0f Mr. Rubio.  About a third of independents regard either of the Republican senators as not very or not at all honest.

Are the Candidates Likeable?

A third of Americans say she is extremely or very likeable while nearly 40 percent regard her as not very or not at all likeable.  Most Democrats (57 percent) like her, while most Republicans (61 percent) and nearly half (48 percent) of independents do not consider Mrs. Clinton likeable. 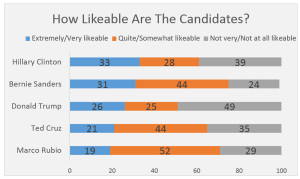 The unanswered question is how these factors will play out during the primary season and how much of a role they will ultimately have in November.

The fieldwork for the Fishlinger Center poll was conducted by Ipsos Public Affairs.  Online interviews with 1,251 adults were collected January 14-22, 2016. Sampling for the survey used a blended approach, combining the Ipsos iSay panel with Ampario sample (a blend of external panel and non-panel sources).  Ipsos measures the precision of its online surveys using a credibility interval to measure sampling error.  The survey of 1,251 respondents has a credibility interval of plus or minus 2.8 percentage points. The credibility interval may be larger for subgroups.  The poll is subject to other potential sources of error, including, but not limited to coverage and measurement error.  Data were weighted to match the national population on age, sex, Hispanic origin and race.