Home / Affordable Health Care: A Right or a Privilege?

Affordable Health Care: A Right or a Privilege?

The new Fishlinger Center for Public Policy Research at the College of Mount Saint Vincent seeks to foster meaningful dialog on key public policy issues through independent, objective public opinion research. This initial survey focuses on social issues in the United States. This is the second report from the survey; the first report concentrated on human trafficking. Additional reports on other social problems covered in the survey will be released in the coming months.

While there is substantial agreement that a lack affordable health care in the United States is a serious concern, the public is divided on who exactly is entitled to health care. The rising costs of health care is regarded as a widespread problem; nearly two-thirds of Americans know someone personally who has had trouble paying for medical bills.

The Problem of Affordable Health Care

Two-thirds of the public considers the unavailability of affordable medical care to be extremely or very widespread in the United States. This view cuts across party, age, and racial groups, although again, blacks, Hispanics, Democrats, and young adults are the groups more likely to say it is extremely widespread. 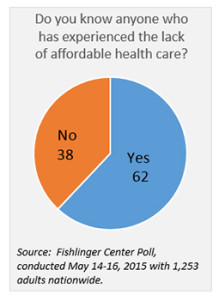 While most Americans see the lack of affordable health care as an important, serious, widespread problem, less than a third (31 percent) say the issue is being dealt with adequately. Nearly half (48 percent) are lukewarm about the level of focus being given to health care and 21 percent say the problem is not being addressed very well or at all. 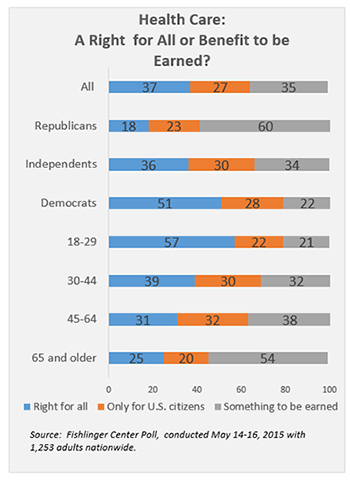 There are also strong partisan and generational differences, with Republicans and older Americans more inclined to consider health care something that should be earned or worked for.

Among those who see the country as being on the wrong track (62 percent) only about a quarter (27 percent) regard health care as a right for all residents.

The fieldwork for the Fishlinger Center poll was conducted by Ipsos Public Affairs. Online interviews with 1,253 adults were collected May 14 to 26, 2015. Sampling for the survey used a blended approach, combining the Ipsos iSay panel with Ampario sample (a blend of external panel and non-panel sources). Ipsos measures the precision of its online surveys using a credibility interval to measure sampling error. The survey of 1,253 respondents has a credibility interval of plus or minus 2.8 percentage points. The credibility interval may be larger for subgroups. The poll is subject to other potential sources of error, including, but not limited to coverage and measurement error. Data were weighted to match the national population on age, sex, Hispanic origin, and race. For purposes of analysis, black, Hispanic, and Asian respondents were oversampled. These groups were then weighted down to their proper proportion of the population.