The Fishlinger Optimism Index™, a breakthrough measurement of public opinion centered on Americans’ optimism about the future from the Fishlinger Center for Public Policy Research at the College of Mount Saint Vincent, fell to 48 in August, the lowest reading since the Index’s inception. 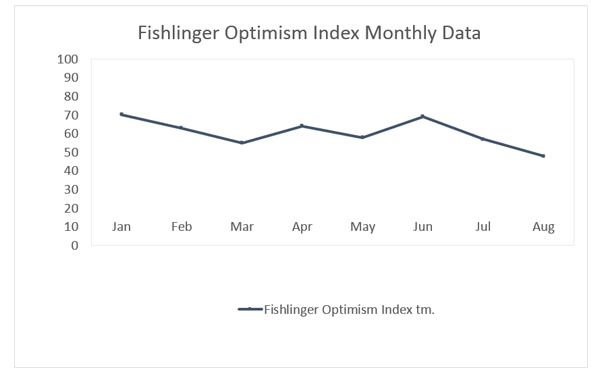 August was an eventful month for the Trump administration. The president received criticism for his response to the tragic events in Charlottesville, Va. and his pardoning of former sheriff Joe Arpaio. Other notable factors contributing to the criticism may be heightened tensions in North Korea and Congressional budget battles, which raise the specter of a potential government shutdown. 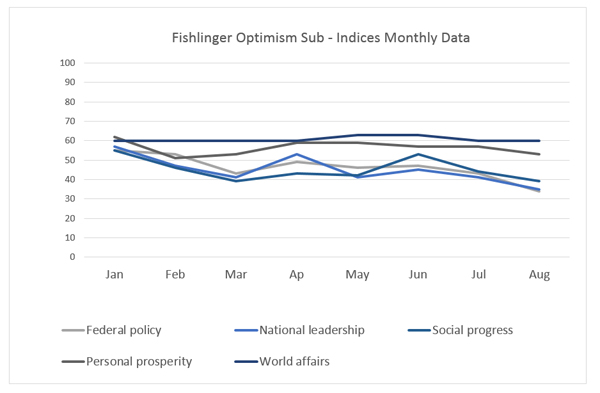 In this study, the Fishlinger Center conducted online national surveys focusing on political issues in the United States. The fieldwork for the polls was conducted using a blended national panel form Survey Sampling, Inc. Interviews were conducted November 29-December 15, 2016 and January 3-August 28, 2017. The credibility interval for 1,000 respondents is plus or minus four percentage points. The credibility interval is larger for subgroups and for differences between polls.

In addition to credibility interval, the polls are subject to other potential sources of error including, but not limited to, coverage and measurement error. Data was rim weighted to match the national population on age, sex, Hispanic origin, and race. Question wording and topline results are available at fishlingercenter@mountsaintvincent.edu.