The Fishlinger Optimism Index Levels Off

The Fishlinger Optimism Index™, a breakthrough measurement of public opinion centered on Americans’ optimism about the future from the Fishlinger Center for Public Policy Research at the College of Mount Saint Vincent, leveled off at 54 in October. Previously, the Index recovered slightly in September, moving from 48 in August to 55 in September. 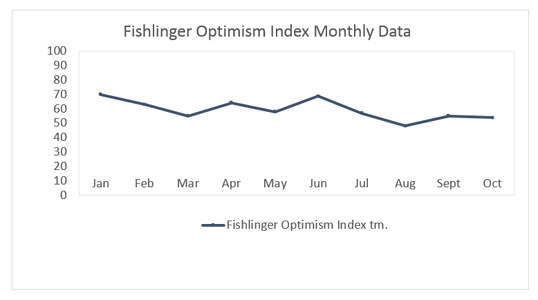 October was a relatively moderate month for the Trump administration with the approval of the proposed budget leading to optimism that tax reform may be passed this year. The stock market continues to hit record highs. The hostilities with North Korea and questions about the Iran nuclear deal seem to have taken a back seat to Hollywood’s Weinstein sexual harassment scandal and Catalonia’s referendum to separate from Spain. However, there has been public discord within the party and resignations of Republican senators, as well as some controversy over the President’s handling of the hurricane relief in Puerto Rico. The impact of the indictment of President Trump’s former campaign manager, Paul Manafort, for allegedly coordinating with the Russian government to damage presidential election candidate Hillary Clinton, is playing out and will be reflected in the November poll. 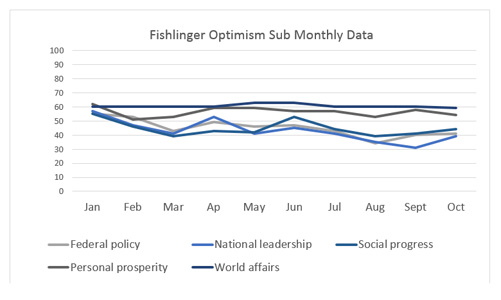 Survey Methodology
The Fishlinger Center conducts online national surveys focusing on political issues in the United States. The fieldwork for the polls is conducted using a blended national panel from Survey Sampling Inc. Interviews were conducted September 5-29, 2017. For a sample of 1,000, the credibility interval is plus or minus four percentage points. The credibility interval is larger for subgroups and for differences between polls.