Since she was young, she’s remained connected and committed to her Native American culture. Now, she’s leading the inclusion of Urban Natives by indigenizing existing infrastructures and ensuring cultural humility in health and wellness services to build more equitable, inclusive, and prosperous communities.

“Seeing the gaps in services that the government provides, I just thought, I can do more,” she said.

King—who’s not only an indigenous health advocate, social entrepreneur, and researcher, but also a Mount alumna—continued the conversation with Indigenous Voices in Mental Health, a discussion on Native American health and wellness, advocacy and social justice, and career pathways in psychology. 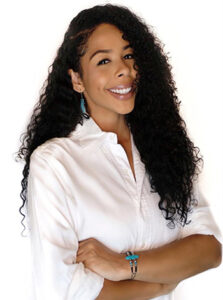 Afro-Indigenous and a descendant of the Menominee and Oneida Nations of Wisconsin, King is President and Executive Director of Urban Indigenous Collective and the Co-Founder of ShockTalk. She holds a B.A. in Psychology from the College of Mount Saint Vincent and an M.P.H. in Global Health from New York University’s School of Global Public Health.

Passionate about both research and improving Indigenous health domestically and internationally, she aims to help bridge the gap of health inequalities that exist for Indigenous people of the North, South, and Central Americas.

In her career, she led the development of the first culturally tailored training, Trauma-Informed Policing, funded by the OJJDP. Designed for law enforcement who engage with Tribal youth without traumatizing them, she has implemented trauma-informed and suicide prevention programs for more than 80 tribes. She also has extensive experience in the management of federal grants and the development, implementation, and evaluation of health programs in Native American and Alaska Native communities within rural and urban areas.

After graduating from the Mount, King served as the Director of Wellness for an Urban Indian Health Program servicing the largest number of Urban Natives in the country. New York City has the largest population of Indigenous peoples in the United States, with more than 112,000 Native Americans living across the five boroughs. Additionally, she has been a consultant and has supported various universities and agencies focused on Indigenous-centered projects, such as University of New Mexico, College of Population Health, Florida State University, and the United Nations Permanent Forum on Indigenous Issues.

In August 2019, King started the UIC, a health and wellness nonprofit for urban Native Americans. UIC devotes its advocacy and support of quality, accessible, and affordable health and wellness services grounded in cultural humility for federal and state recognized tribal members, as well as with self-identified Urban natives living in the tri-state area.

Working to provide healing for Native Americans has been something King says she has wanted to do since the second grade. After moving to the Bronx from Wisconsin nearly a decade ago, she realized that the city was where she wanted to embark on her passion.

“I just knew New York City was where I was supposed to make a difference,” she said.

And she is making a difference, all while spreading awareness and gaining recognition along the way. From amNewYork to The New York Times, her impact continues to grow and her dedication continues to heal those around her.