It’s a stormy afternoon here in Riverdale. Rain has been pounding New York City for the past few hours, causing flooding in the streets and downed power cables. But suddenly—news breaks that there’s a four-alarm fire across the Bronx.

Michelle Ross ’14, who’s currently updating her viewers on News 12 the Bronx of the hazardous travel conditions live from Thunderbolt 12 in Riverdale, now finds herself ripping through the streets of the Bronx to get to the scene of the fire—ready to bring the latest local live news to Bronx residents from Wakefield to Throgs Neck.

As a multimedia journalist and reporter at News 12 the Bronx, Michelle is responsible for all aspects of news production: seeking out stories, scripting, setting up equipment, interviewing, filming, and editing. It’s a job that requires flexibility under pressure and the ability to work almost anywhere—from the subway to her car to the office. 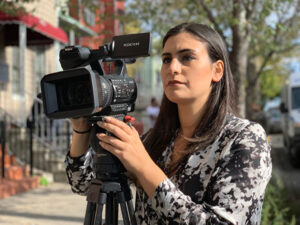 But launching a successful career in journalism was certainly not something Michelle did all on her own. She credits her passion for the press to where she got her start in TV reporting—right here at Mount Saint Vincent.

Before pursuing her current profession, Michelle had hopes of playing in the WNBA. A skilled basketball player, she knew she wanted to continue to play the sport as she transitioned from high school to college and attract the eyes of professional basketball scouts. However, an injury in the tenth grade sidelined her for a season and ended her hopes of attending a Division I school. That’s when she began looking into playing at Division III schools, and Mount Saint Vincent was the perfect fit.

“I originally wanted to go into the field of sports management, since I realized quickly that I wasn’t going to play for the WNBA,” joked Michelle.

She arrived to campus and declared a major in business, but met a few upperclassmen communication majors only a few months into her first year of study.

“It was almost meant to be that I met them,” added Michelle, “because they encouraged me to switch my major to communication and helped me find a course of study I was truly passionate about.”

Michelle can pinpoint a specific class she took while at the Mount that truly led her to her career in journalism and has helped her substantially in the field—especially in her current role at News 12. Under the guidance of Professor of Communication Cynthia Meyers, the video field production class introduces students to basic production techniques for non-studio, nonfiction news reporting.

“Taking that class at the Mount really helped prepare me for what do what I do now,” reflected Michelle. “We were each loaned a camera and a tripod and assigned to go out into the Riverdale community to shoot our own news segments. We were then responsible for editing our own stories and presenting them to the class.” 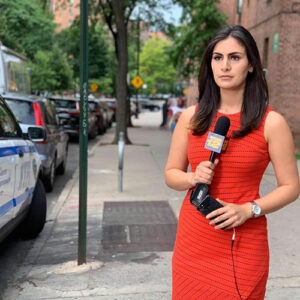 Her courses in communication at the College helped Michelle become the “one-woman show” multimedia journalist she is today—readying her to enter the field with a developed knowledge of both in-front-of and behind-the-camera skills. She even picked up a minor in theatre along the way, helping her improve her vocal clarity and expression!

But as Michelle quickly learned, she had just as many opportunities to develop her skills in journalism outside the classroom as she did within it. As a dedicated member of Mount Media, a student-run club that produces and streams radio and television shows on the Mount’s network and social media accounts, Michelle had the opportunity to get a feel of what it would be like to be a live journalist. 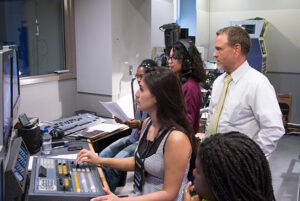 “The Mount Media team and I created The Lifestyle, my own show that aired on the College’s on-campus television network,” mentioned Michelle. “Each week, I interviewed different members of the Mount community and discussed their roles on campus. I wanted to do more news-related broadcasting, but The Lifestyle was a way for me to get my toes wet in the TV production field.”

Off campus, Michelle held two coveted internships: The Bill Cunningham Show and the Rachael Ray Show. The Mount’s close proximity to midtown Manhattan—where both studios were located—provided Michelle with ample opportunities to expand her knowledge and network with industry professionals. 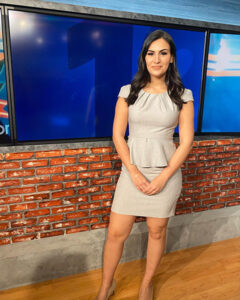 Although they were both great experiences, her internships taught Michelle that she was no longer interested in going into that genre of broadcast television. She was mostly working behind-the-scenes in production, but she wanted to be the one in Rachael Ray’s spot—delivering the content in front of the camera and not behind it.

Her advice to students finding themselves in a similar situation?

“Even if you’re feeling stuck in an internship you particularly don’t like and thinking it won’t take you to where you want to be in your career, it might actually take you there. Through my internships, I learned that my passion was rooted in news and politics and not talk shows, and I’m grateful to have learned that early into my career.”

And while the skills and practice she gained from her courses, internships, and club involvement at the Mount have helped her substantially in these first few years of her career, the most memorable aspect of her Mount experience was, without a doubt, the support and mentorship she received from her instructors—particularly from Professor of Communication Vincent Fitzgerald.

“Dr. Fitzgerald saw my potential from the very beginning and he encouraged me to get a job in the broadcast journalism field,” said Michelle. “If I was ever questioning or doubting myself, I knew I could always count on him to support me.” 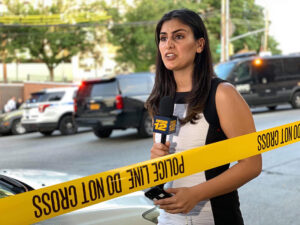 As a daily news reporter, Michelle remarked that no two days on the job are ever the same. Working with the nightside crew, she typically arrives to work around 1:30 pm. She meets her the team and the journalists get assigned the story they will be covering for the day. Sometimes she’ll take her laptop with her and edit out in the field. Other times she’ll travel back to the station and edit there. Luckily the Bronx isn’t all that big, so the commute is never too far!

But rarely does a day ever go exactly as planned.

“Many times, because of breaking news, I get pulled off of my originally assigned story,” said Michelle. “If that’s the case, I’ll rush to meet a videographer at a particular location and we’ll go live—sometimes with only minutes to spare!”

And even after years in front of the camera, those anxious butterflies still find a way to pop up in Michelle’s stomach.

“I still get pretty nervous every time I’m about to go on-air,” added Michelle. “What helps keep me calm is knowing that, whenever I’m live, I’m not in front of a huge crowd. Most of the time it’s just me and the camera—but if the nerves aren’t there, then the passion isn’t there.” 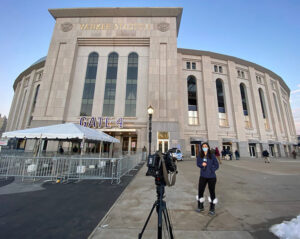 No matter where in the Bronx Michelle’s delivering news, her heart will always be connected to Riverdale and Mount Saint Vincent—where she found her drive for journalism.

“I absolutely believe that the Mount helped launch my career. I really owe it to the professors who tried their hardest to give their students access to all the resources that a small school would not normally get. They want to see you walk across that commencement stage at the end of your senior year, and they dedicate themselves to help you succeed every step of the way.”

To learn more about Michelle’s Mount Made journey, be sure to check out the full video interview!