Optimism About Trump Falls in May

The public’s satisfaction with Trump continues to fall this May behind the level Obama achieved during his final months as president, according to the Fishlinger Optimism Index™, a breakthrough measurement of public opinion centered on Americans’ optimism about the future from the Fishlinger Center for Public Policy Research at the College of Mount Saint Vincent. 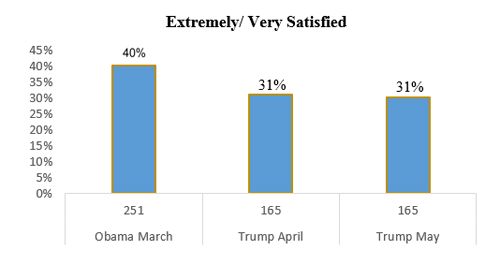 More significantly, optimism toward Trump’s presidency dropped from 36 percent in April to only 30 percent a month later. This may have been caused by the publicity surrounding potential connections between the Trump administration and Russia, escalated by the appointment of an FBI special counsel to investigate the ties. 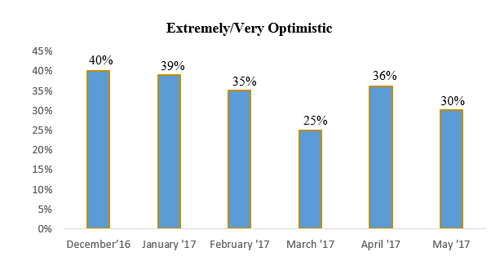 In this study, the Fishlinger Center conducted online national surveys focusing on political issues in the United States. The fieldwork for the polls was conducted using a blended national panel from Survey Sampling Inc. Interviews were conducted November 29-December 15, 2016 and January 3-May 31, 2017 with 1,000 adults with a credibility interval of plus or minus 3 percentage points. The credibility interval is larger for subgroups and for differences between polls.