Practice Must Go On

No games, but Mount Saint Vincent teams practicing with eye on future

This story originally appeared on News 12 The Bronx.

Even though COVID-19 continues to rattle the college sports landscape, the College of Mount Saint Vincent Dolphins’ preparations for the eventual start of competition have not let up. Teams have continued with intensive practices, workout regimens, and team gatherings—all with modified safety and cleanliness protocols.

News 12’s Dan Serafin visited campus last week to check in on our Women’s Soccer and Volleyball teams, who are still hustling on the field and on the court. 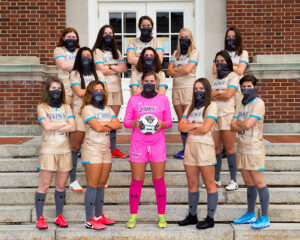 “The College has done a fantastic job,” said Head Women’s Soccer Coach Stuart Dick. “They tried their hardest to get the season on as much as they could. It’s just unfortunate—one team after the other started to drop out and then it wasn’t that feasible.”

And though many players are missing out on the opportunity to engage in the final season of their collegiate careers, they are also just as excited to help mentor and train younger members of the team.

“It was hard for us to deal with this, especially it being our senior year,” said defender Alyssa Santeramo ’21. “It was definitely not what we wanted, but since we still get to practice, we still want to make the best of it.”

“There’s so much potential on this team and coming into our senior year we all thought we were going to go for a championship this year,” continued midfielder Grace Barry ’21. “These girls have the potential to go to a championship next year—so I think our senior role is basically mentoring them to make sure they get that chance.”

That same passion radiates from the volleyball court of the Peter Jay Sharp Athletic and Recreation Center. 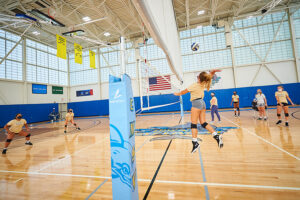 “I love playing—I’ve always loved playing. And I think just because you don’t get to compete it doesn’t mean it’s over,” said defensive specialist and libero Alexandra Rio ’21.

“There’s only room for improvement,” said one of the team’s newest members, Isabella Garcia ’24. “You get space to work on the little things that you wouldn’t necessarily get to do in a general season.”

And working on the little things is something very important to Head Women’s Volleyball Coach Courtney Bernstein, who described to News 12 what a typical practice session looks like in the middle of a pandemic.

“It’s definitely less stressful,” she said. “We have a little bit more freedom because we’re not prepping for a game the next day, but still kind of approaching it the same way. We want to cover the basics.”