Ahead of Inauguration Day and the Women’s March on Washington, satisfaction with Barack Obama increased as his second term ends.  At the same time optimism for the next president has stayed about the same as measured after the election in December, according to online polls conducted by the Fishlinger Center for Public Policy Research at the College of Mount Saint Vincent.

National polls conducted by the Fishlinger Center will continue to examine public attitudes toward Donald Trump, particularly in the period after the inauguration when presidents typically experience a honeymoon period. 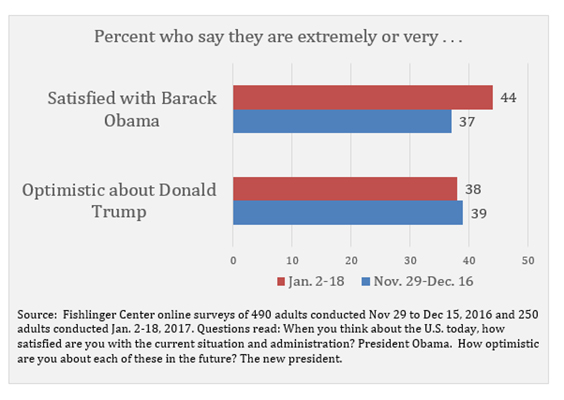 Comparison to Previous Elections
President elect’s ratings don’t necessarily improve during the pre-inaugural period. Mr. Trump is atypical because his numbers are so low. Here are some past president-elect favorable ratings for comparison:

It is not usual for outgoing president to be rated better than incoming one, but usually not by much, with a few exceptions.

The Fishlinger Center conducts online national surveys focusing on political issues in the United States. The fieldwork for the polls is conducted using a blended national panel from Survey Sampling Inc.  Interviews for the latest polls were conducted Nov. 29 through Dec. 15 with 490 adults and Jan.2 through Jan.18. The credibility interval for each poll is plus or minus 6 percentage points.