He had spent months preparing graduate school applications, putting in the same kind of hard work and meticulous attention he gave to his studies over the last four years at the Mount. And TJ aimed high, including some of the nation’s most rigorous and highly selective programs among his choices.

After quite a year—especially for so many of the world’s soon-to-be graduates gearing up to finish the last semester of their undergraduate career—he logged on to check the application status for just a few of the dental school programs to which he’d applied.

Almost immediately his computer pinged him with an alert. Just like that, he opened it and stared back at his first notification, happily learning that he’d been accepted. Within moments, a second acceptance came in. Checking again, a third.

That’s when he opened FaceTime to call his parents. Together they watched the acceptances roll in—one after another. At last, his final acceptance to dental school lit up his screen. He knew his chances were good, but he never expected this outcome.

Tobiras had officially been accepted to all 15 programs he had applied to.

Growing up in Queens and later Long Island, N.Y., in a family of college-educated health professionals—his mother, grandmother, older sister, and an aunt are all in the nursing profession—he discovered an affinity for the sciences, especially biology. But, in high school, athletic ability was prized more than his scientific bent, so he kept quiet about his aspirations.

All that changed once he came to the Mount. 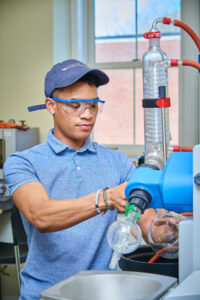 “In every class, I was given the room to explore and blossom,” he said. “It completely changed my outlook—I knew I could ask questions without sounding like a nerd.”

In every course—be it biology, organic chemistry, or biochemistry—TJ excelled. His teacher and mentor, Director for the Division of Natural Sciences and Associate Professor of Chemistry Pamela Kerrigan, saw the young man’s potential and challenged him to explore his interests.

Of course, gaining admission to any dental medicine program requires far more than just solid academics—and he was ready.

He spent the summer after his freshman year shadowing members of a dental practice when he knew he’d found his calling. “I loved the tools and instruments, the interaction with patients, and how hands-on it all was.” Once he was back on campus that Fall, he took his resume around to every dental office he could find, offering to volunteer or shadow the practitioners—anything to get his foot in the door.

On campus, Dr. Kerrigan recognized TJ’s leadership ability and encouraged him to become a peer leader for her First Year Experience classes. He joined activities hosted by student groups like the Mount MDs, the Science Club, and SAMAHAN, often serving as organizer and even president. His dedication to service flourished when he and fellow science club members traveled to the New York Hall of Science to perform interactive, hands-on experiments with children from ages 3 to 11, an activity he recalls with great relish. 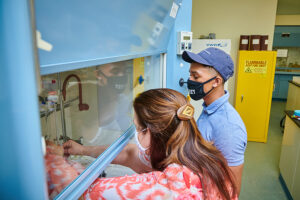 It’s easy to see how Tobiras’ accomplishments both in and outside the classroom made him a prime candidate for every school he applied to, but what may have truly captured the attention of those 15 admission offices was his passion for serving communities needing culturally competent dental care.

“During my internships I witnessed patients with barely the means to get the care they needed,” he said. “Serving underrepresented populations showed me how I could be of service in the world. I knew that when I finally got to practice dental medicine, I would be more sensitive and responsive to the needs of everyone who came in for care. That’s when I knew I wanted to do more.”

And that’s exactly what he plans to do.

In the end, after considering all of his offers—including an Ivy League option and the #1 ranked dental school in the U.S.—he made his decision: The University at Buffalo School of Dental Medicine.

“Columbia was my dream school for so long,” he recalled. But when asked what attracted him most, he realized it was mostly the prestige. And while it’s well-earned, he knew he had to follow his heart: “I didn’t know if that would be the right place to help me become a well-rounded clinician.”

Buffalo, he felt, would afford him more opportunities to work with disadvantaged populations—and the full-ride scholarship they offered didn’t hurt either.

“Knowing my family and I would be relieved of years of debt and financial stress really helped in solidifying my decision,” he said.

Now, Tobiras is enjoying the final few weeks of his senior year before graduation, taking the time to reminisce on the supportive atmosphere he found from day one at the Mount. His gratitude extends to the entire campus community—from fellow classmates and administrative staff to, most importantly, his teachers.

The day after the exhilarating landslide of acceptances, TJ immediately emailed Dr. Kerrigan to thank her for her guidance and support.

“Yesterday was absolutely surreal,” he wrote. “Lots of tears of joy and love and support from my friends and family. I want to share this moment with you since you have been an immense pillar along this journey. I will always pay it forward by expressing my gratitude and having it reflected in my ability to be the absolute best I can be. Thank you.”