This is the fourth report from the survey; the earlier reports concentrated on human trafficking, the lack of affordable health care and root causes of poverty. Additional reports on other social problems covered in the survey will be released in the coming months.

About three-quarters of Americans regard domestic violence to be a serious problem in the United States, and 60 percent consider the problem to be widespread.  Large majorities agree that domestic violence is more than just physical and includes sexual, verbal and psychological as well 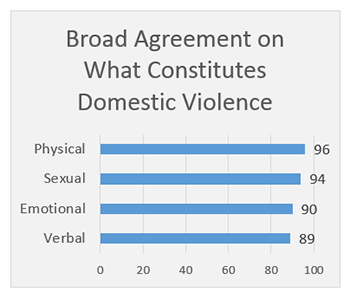 Sixty percent of Americans describe domestic violence as an extremely or very pervasive problem in the United States.  There is little difference among demographic groups, although those who say they know a victim of domestic violence are much more inclined to regard the problem as widespread. 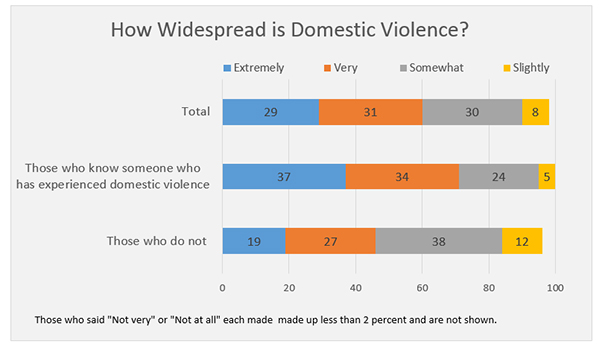 The rate of domestic violence has dropped significantly over the past decade, according to the Department of Justice, but the issue remains crucial.  The intense news coverage when professional athletes and entertainment celebrities are arrested and charged with abuse can serve to inform the public of domestic abuse and its dangers. 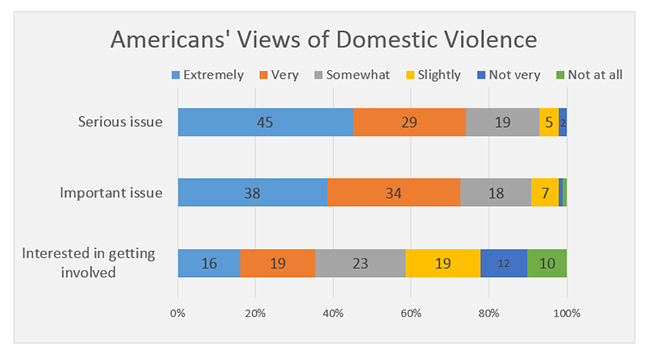 At the same time, less than 4 in 10 say they know a lot about the subject.  Nearly half of Americans under 30 say they have extensive or quite of bit of knowledge of domestic violence, while fewer older Americans say they are familiar with the problem.  The increased knowledge among younger Americans could be due to recent efforts by the Department of Justice years to reduce domestic violence on college campuses.

Despite progress in bringing attention to the issue, many cases of domestic violence go unreported to authorities.  According to the Bureau of Justice Statistics, only about 60 percent of physical violence within families is reported to the police. 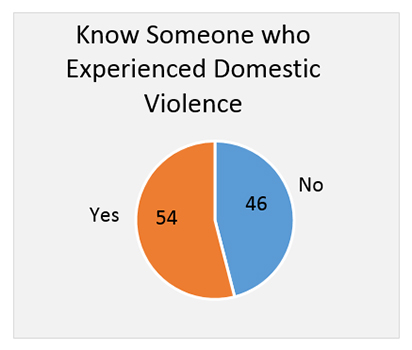 The fieldwork for the Fishlinger Center poll was conducted by Ipsos Public Affairs.  Online interviews with 1,253 adults were collected May 14 to 26, 2015.  Sampling for the survey used a blended approach, combining the Ipsos iSay panel with Ampario sample (a blend of external panel and non-panel sources).  Ipsos measures the precision of its online surveys using a credibility interval to measure sampling error.  The survey of 1,253 respondents has a credibility interval of plus or minus 2.8 percentage points.  The credibility interval may be larger for subgroups.  The poll is subject to other potential sources of error, including, but not limited to coverage and measurement error.  Data were weighted to match the national population on age, sex, Hispanic origin and race.  For purposes of analysis, black, Hispanic and Asian respondents were oversampled.  These groups were then weighted down to their proper proportion of the population.