Election 2016 – Post-Convention: Heading Toward the Home Stretch before Labor Day

Now that the Republican and Democratic candidates have been officially chosen for the 2016 presidential election, the latest national poll from the Fishlinger Center for Public Policy Research at the College of Mount Saint Vincent finds fewer voters are unhappy with the process.  And while most voters continue to say the country is headed in the wrong direction, that number has dropped from 60 percent to 54 percent.

The Fishlinger Center for Public Policy Research at the College of Mount Saint Vincent seeks to foster meaningful dialog on key public policy issues through independent, objective public opinion research. The national surveys of 2016 will focus on political issues in the United States ahead of the Presidential election in November.

Mrs. Clinton has been confronted by a new round of questions about potential conflicts of interest about her family’s foundation and her work at the State Department as well as the prospect that more e-mails from her private account will be released right up to the November election. However, Mr. Trump has not been able as yet to capitalize on these problems with the Clinton campaign and continues to trail Mrs. Clinton in the Fishlinger Poll as well as in the Real Clear Politics national average.

Among those who say they plan to vote in November, 48 percent prefer Mrs. Clinton and 37 percent support Mr. Trump.  Gary Johnson, the Libertarian candidate, is backed by 11 percent of the voters.  In order to be included in the presidential debates, a candidate needs to receive an average of 15 percent in the ABC News/Washington Post, New York Times/CBS News, CNN, Fox News and NBC News/Wall Street Journal polls.  The Green Party candidate, Jill Stein, received 3 percent.

State of the Country 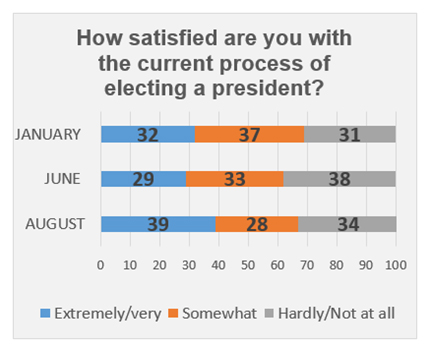 The months of candidate speech-making, political advertising, and party conventions has done little to change voters’ views of the country’s election process.

Voters were slightly more negative in June compared with the results of the poll taken in January before any primaries were held.    And now after the conventions, they are slightly more satisfied.


Voters’ impressions of Mrs. Clinton have improved since the conventions, while the opinions of Mr. Trump have stayed pretty much the same. Mrs. Clinton is seen as even more qualified and better able to deal with foreign and domestic policy than she was in June. Neither candidate is viewed as particularly honest or likeable. 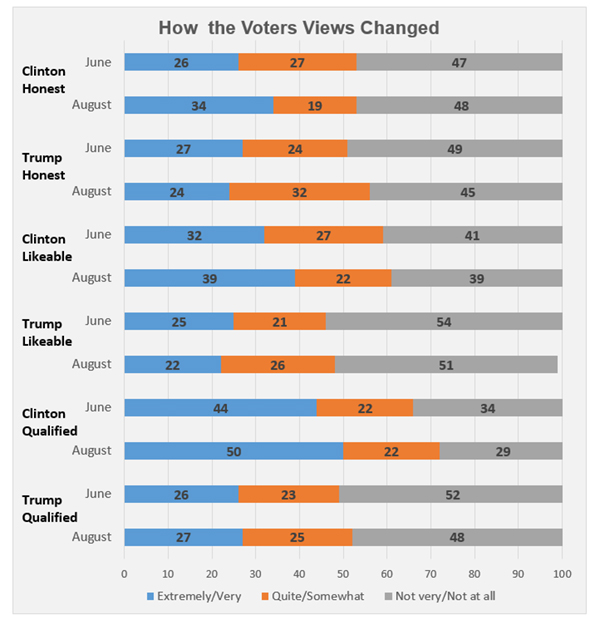 Profiles of the Candidates’ Supporters

Mrs. Clinton does best with better educated and more affluent voters. Non-whites and urban voters are more inclined to support her, as are younger voters. Mr. Trump is preferred by older voters and those living outside cities. White voters are closely divided, as are independents.

Gary Johnson, the Libertarian candidate, does best with independents and voters who say they have some college. Those voters may currently be students.

Jill Stein, the nominee of the Green Party, is getting about 3 percent of the vote largely from  those who say Bernie Sanders was their first choice back in January. 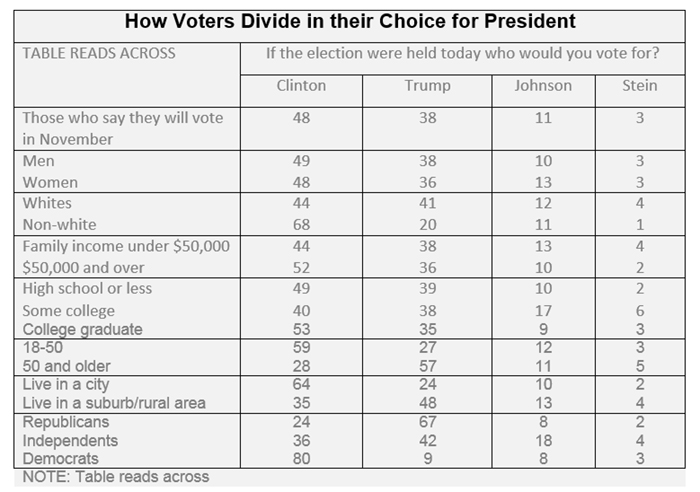