Election 2016
Pre-Conventions: The Electorate is Dissatisfied and Polarized

In advance of the Republican and Democratic conventions this month, the latest national poll from the Fishlinger Center for Public Policy Research at the College of Mount Saint Vincent finds most voters feeling negative about the direction of the country and the state of the government’s policies.

Mrs. Clinton is seen as more qualified than Mr. Trump, but both candidates have trouble regarding their likeability and voters’ perceptions of their honesty.

The Fishlinger Center for Public Policy Research at the College of Mount Saint Vincent seeks to foster meaningful dialog on key public policy issues through independent, objective public opinion research. The national surveys of 2016 will focus on political issues in the United States ahead of the Presidential election in November.

How are things going in the U.S. these days?

Overall, 60 percent of voters say the country is headed in the wrong direction, and 40 percent say it is moving in the right direction.  However, there are substantial partisan differences.

Throughout Barack Obama’s presidency, Democrats have tended to be much more supportive of the President than Republicans. This poll shows a similar divide:  Most Democratic voters regard the country as headed in the right direction, while nearly three-quarters of Republicans and 7 in 10 independents say the country is moving in the wrong direction.

In the same way, voters who said their first choice is Hillary Clinton see the United States moving in a positive course, while those who selected Donald Trump as their first choice say the country is headed in the wrong direction. 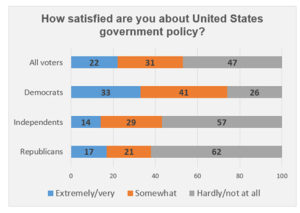 Voters are also not very enthusiastic about government policies in general, or specifically the country’s domestic or foreign policies.  Nearly half of voters are hardly or not at all satisfied with government policies, 3 in 10 are somewhat satisfied and less than a quarter are very or extremely satisfied.  Again, Democrats are more positive about the programs of the Obama administration than Republicans and independents. 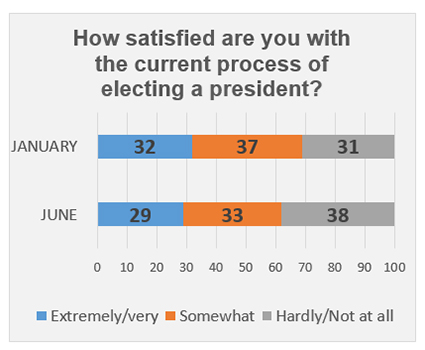 The months of primary campaigns did little to change voters’ views of the country’s election process.

Voters are slightly more negative compared with the results of the poll taken in January before any primaries were held.

At that time, about 3 in 10 voters were hardly or not at all satisfied with the process. Now, nearly 4 in 10 are not satisfied with how the United States goes about electing its president. 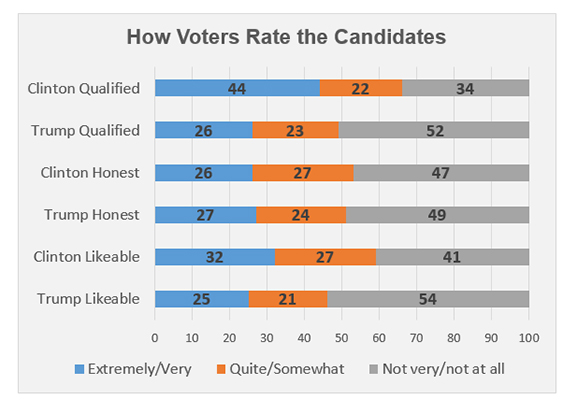 Voters find Mrs. Clinton more qualified and better able to deal with foreign and domestic policy than Mr. Trump.  Neither candidate is seen as particularly honest or likeable.

Of course, there are large partisan differences.  For example, 73 percent of Democrats consider Mrs. Clinton extremely or very qualified, compared with 18 percent of Republicans and 32 percent of independents.

Republicans are not quite as positive about their party’s presumptive nominee.  Forty-five percent of Republicans describe Mr. Trump as extremely or very qualified, along with 16 percent of Democrats and 21 percent of independents.

Voters who support Mrs. Clinton are much more supportive of same day registration than Mr. Trump’s supporters (75 percent vs. 45 percent).  Most of those who prefer Mrs. Clinton support requiring photo identification verification for voting, along with nearly voters who back Mr. Trump (69 percent vs. 93 percent).

Compared with voters who selected Mrs. Clinton as their first choice, Mr. Trump’s supporters are much more dissatisfied with current government policies, both domestic and foreign. 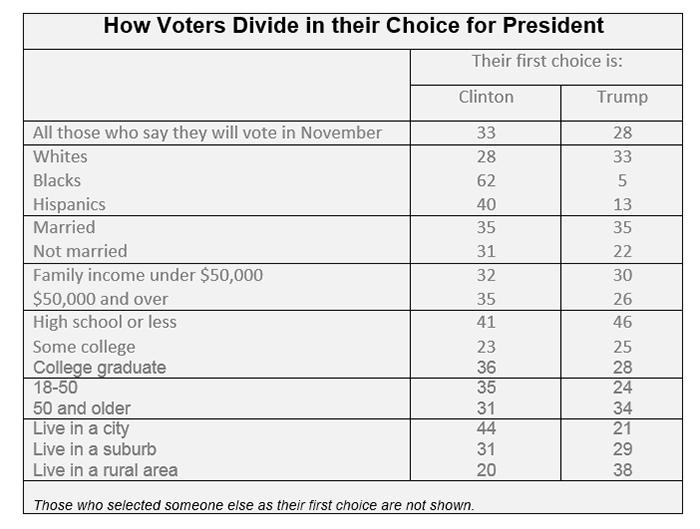 Who will win in November?

When asked who their first choice would be if the election were held today, 33 percent selected Mrs. Clinton and 28 percent picked Mr. Trump. Nearly 4 in 10 selected someone else from a list of potential candidates remaining after the primaries. 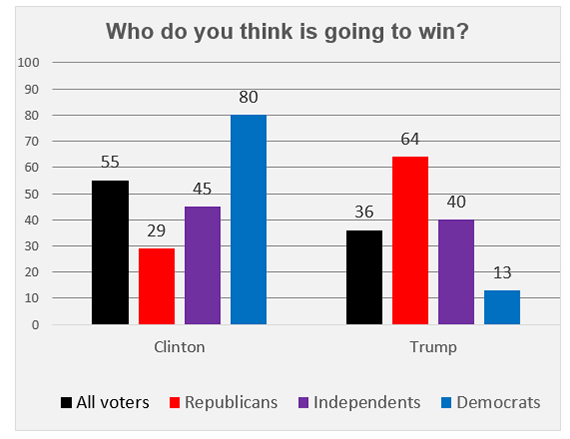 Academic research released in 2012, suggests that poll questions about who voters expect to win are a better guide to the ultimate outcome that surveys of voters’ intentions.  If that holds true in 2016, the poll has good news for Mrs. Clinton.  Fifty-five percent of voters expect to see Mrs. Clinton elected in November and 36 percent think Mr. Trump will prevail. 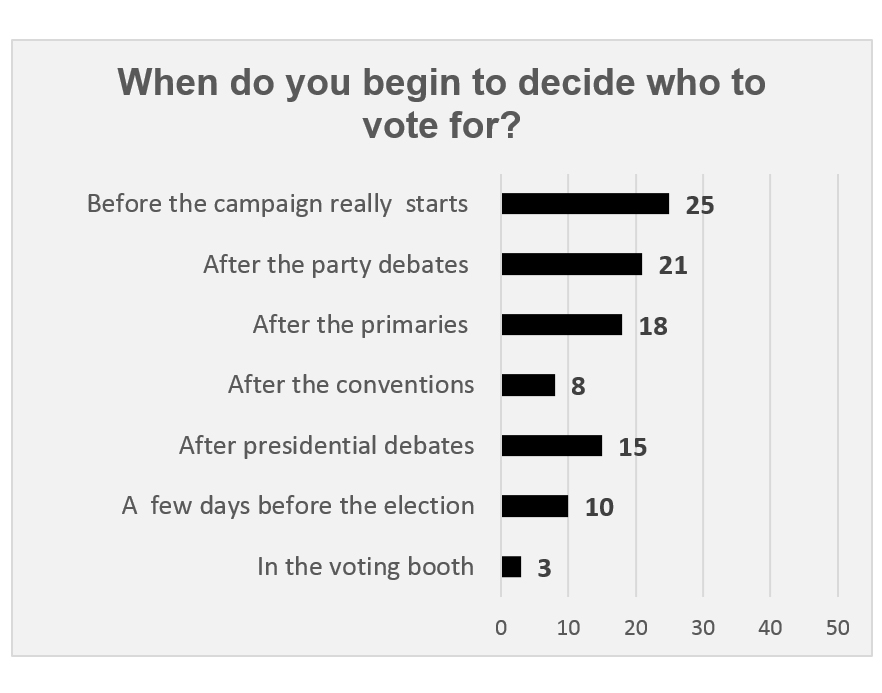 Neither presumptive nominee has named a vice presidential pick.  While past research has found the vice presidential selection generally has little effect on the final outcome, the 2016 presidential election has been far from traditional so far. Therefore lessons from previous elections may be moot.

And it is unknown what effect of the third party candidates might have on the election.  Currently, an average of about 10 percent of voters support either the Libertarian or the Green Party candidate.

The fieldwork for the Fishlinger Center Poll was conducted using a blended national Survey Sampling Inc. panel. Online interviews were conducted with 912 adults who reported they are registered or plan to register to vote January 4 to 25, 2016 and with 845 adults who said they plan to vote interviewed online June 8 to July 5, 2016. The survey has a credibility interval of plus or minus 4.0 percentage points for those who plan to vote in November. The credibility interval may be larger for other sub-groups. The poll is subject to other potential sources of error including, but not limited to coverage and measurement error. Data were rim weighted to match the national population on age, sex, Hispanic origin and race. Question wording and topline results are available at fishlingercenter@mountsaintvincent.edu.