Election 2016 – Presidential Race Tightens Ahead of the First Debate

Less than eight weeks before Election Day, Hillary Clinton and Donald Trump are locked in a close contest in which the challenge from third party candidates could make a difference.  In the latest national poll from the Fishlinger Center for Public Policy Research at the College of Mount Saint Vincent, Mrs. Clinton, the Democratic nominee is supported by 44 percent of likely voters, while 40 percent prefer Mr. Trump.

The race has clearly grown tighter in recent weeks.  National polling averages have narrowed in the last month, and recent polls in several battleground states have shown the race to tighter as well.

In the Fishlinger poll, Gary Johnson, the Libertarian candidate has the support of 13 percent and the Green Party nominee, Jill Stein, gets 3 percent.   Mr. Johnson is hoping to take part in the presidential debates, however he has not yet reached 15 percent in an average of the major media polls.  So, Mr. Johnson will not be included in the debate on Sept. 26 and his running mate, William Weld, also does not qualify for the Vice Presidential debate on Oct. 4.

Voters do not seem to be particularly pleased with either major party candidate. Both candidates face doubts about their honesty. Measures of the candidates’ likeability and qualifications have declined.

Mrs. Clinton continues to be confronted with questions about her family’s foundation, her work at the State Department, and her use of a private email server while Secretary of State.  And after months of questions from Mr. Trump about her health and stamina, she nearly collapsed at the 9/11 commemoration in New York City with pneumonia.

Mr. Trump has also been facing questions about his foundation, along with persistent requests for his tax returns.  Recently, while retreating from the claim questioning President Obama’s citizenship, he charged Mrs. Clinton with initially raising the question during her 2008 primary battle with Mr. Obama.

The Fishlinger Center for Public Policy Research at the College of Mount Saint Vincent seeks to foster meaningful dialog on key public policy issues through independent, objective public opinion research. The national surveys of 2016 focus on political issues in the United States ahead of the Presidential election in November. 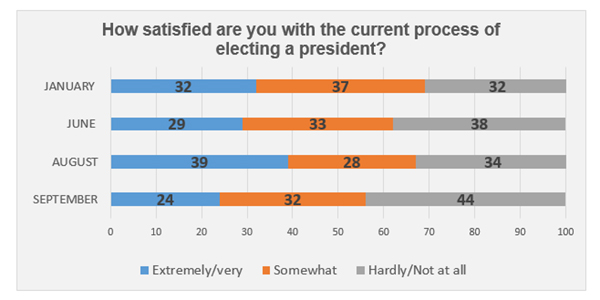 State of the Country 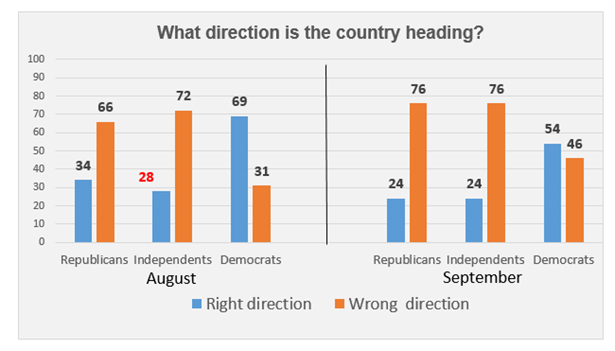 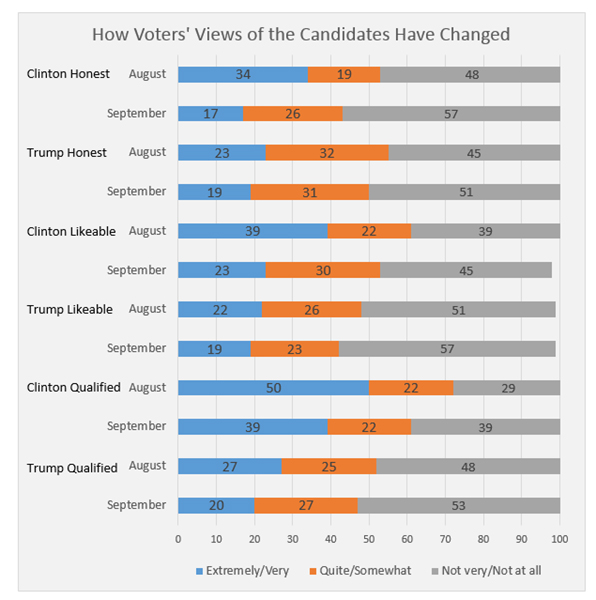 Both candidates have taken a hit in recent weeks.  The voters’ impressions of Mrs. Clinton and Mr. Trump have declined, although Mrs. Clinton continues to be seen as more qualified and better able to deal with foreign and domestic policy than Mr. Trump.

Four in 10 voters consider Mrs. Clinton extremely or very well qualified, down from 50 percent in August, but still ahead of Mr. Trump’s 20 percent.  Neither candidate are seen as particularly likeable or honest.

While the contest has gotten tighter, Mrs. Clinton remains the candidate to beat. Like the election forecasters at 538 and The New York Times’s Upshot, voters expect Mrs. Clinton to prevail in November.  Fifty-nine percent say Mrs. Clinton will win the election and 37 percent expect Mr. Trump to be the victor.

Profiles of the Candidates’ Supporters 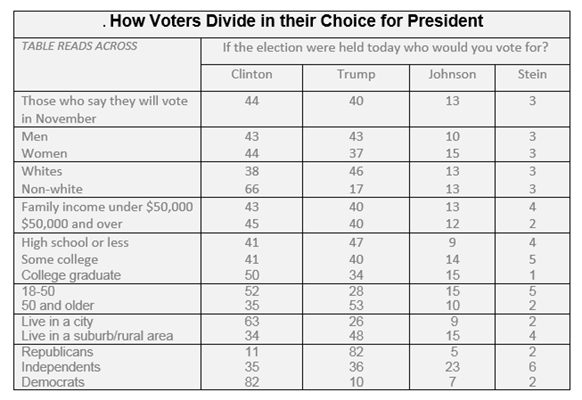 Mrs. Clinton has the advantage with better educated and younger voters. Non-whites and urban voters are also more inclined to support her.  Mr. Trump is preferred by older voters and those living outside cities.

The first and second surveys each have a credibility interval of plus or minus 4.0 percentage points for those who plan to vote in November.  The credibility interval for the results from August and September is plus or minus 5.0 percentage points. The credibility interval may be larger for other sub-groups. The polls are subject to other potential sources of error including, but not limited to coverage and measurement error. Data were rim weighted to match the national population on age, sex, Hispanic origin and race. Question wording and topline results are available at fishlingercenter@mountsaintvincent.edu.