Election 2016 – Race Tightens Before the Final Drive to Election Day

While Hillary Clinton continues to have a significant advantage over her Republican rival, Donald Trump, the race has tightened slightly, according to the latest national poll from the Fishlinger Center for Public Policy Research at the College of Mount Saint Vincent.

Interviewing was conducted after the F.B.I. director, James Comey’s disclosure on October 28 that his agency was looking into a potential new batch of messages from Mrs. Clinton’s private email server.  The survey was completed before the announcement on Sunday that there was no evidence in the new emails to warrant any charges over her handling of classified information.

Political partisans are sticking by their parties’ nominees. Mrs. Clinton is supported by a large majority of Democrats and Mr. Trump is the choice of most Republicans.  It is the shifting preferences of independents that has been driving change. 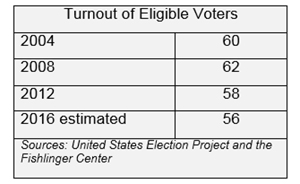 Much of what will happen on Tuesday depends on turnout.  The Fishlinger Center used a proprietary prediction model with inputs based on historical data, perceptions of the candidates and certainty measures from the survey to project expected turnout for the election.

“Ceretis paribus,” or barring unforeseen events, the Center predicts a turnout of 56 percent of eligible voters down from 58 percent in the last presidential election.

Anecdotal evidence collected in the poll but based on small samples suggests that the supporters of third party candidates appear to be much less certain about voting and their vote choice than those voters who prefer one of the major party nominees.  Historically, third party candidates tend to get more support in pre-election polls than on Election Day.  In a close election, this could be the deciding factor with both Johnson and Stein each polling at 7 percent.