Home / Election 2016: Who Do Americans Think Will Win?

Election 2016: Who Do Americans Think Will Win?

Clinton and Trump are virtually equal; Sanders and Cruz trail significantly. Will someone else emerge?

Rather than asking for the voters’ preferences for the Democratic and Republican nomination, the latest nationwide poll conducted by the Fishlinger Center for Public Policy Research at the College of Mount Saint Vincent looks toward November. And two candidates are currently the clear front runners: Hillary Clinton and Donald J. Trump. Ted Cruz and Bernie Sanders trail significantly. At this juncture, one must ask whether they are really electable. 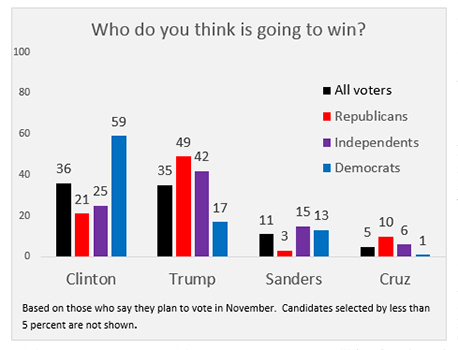 Americans who say they plan to vote in November are evenly divided on whether Mrs. Clinton or Mr. Trump will ultimately prevail in November. Thirty-six percent expect Mrs. Clinton to win the presidency and just about the same number, 35 percent, anticipate Mr. Trump’s election. Not surprisingly, most Democrats (59 percent) say Mrs. Clinton will win, while 49 percent of Republicans say Mr. Trump will be the victor in November. However, more independents foresee the election of Mr. Trump than Mrs. Clinton, 42 percent versus 25 percent. 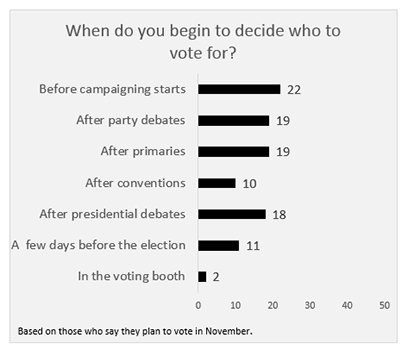 It is still early in the campaign. No one has voted yet, and standings of the candidates could certainly change during the ups and downs of the primary season.

Candidates who do not do well in the early primaries will probably drop out of the race, and where their support moves could be important for remaining candidates.

Of course, there is always there is still plenty of time for the possibility of a candidacy-ending gaffe or disclosure that could alter the state of the campaign.

And there is the possibility another option will emerge. A recent article in The New York Times reported that former New York City mayor, Michael R. Bloomberg is considering making a run for the presidency as an independent.

The fieldwork for the Fishlinger Center poll was conducted by Ipsos Public Affairs.  Online interviews with 1,251 adults were collected January 14-22, 2016. Sampling for the survey used a blended approach, combining the Ipsos iSay panel with Ampario sample (a blend of external panel and non-panel sources).  Ipsos measures the precision of its online surveys using a credibility interval to measure sampling error. The survey of 1,251 respondents has a credibility interval of plus or minus 2.8 percentage points; plus or minus 3.o for the 1,096 respondents who said they plan to vote in November. The credibility interval may be larger for other subgroups. The poll is subject to other potential sources of error, including, but not limited to coverage and measurement error. Data were weighted to match the national population on age, sex, Hispanic origin and race.