The Fishlinger Priorities Segmentation Study focuses on current issues faced by Americans, as well as their beliefs and values. This report presents an examination of the segments of the US population based on the importance they ascribe to various social and political issues facing the country today is presented.

Segmenting on these issues corresponds directly to the benefits they are seeking and ensures that any communications developed from this strategic view focus on key causal drivers of behavior. It is felt that this approach is superior to traditional behavioral and demographic forms of segmentation that are merely descriptive.

Differences in perceptions, attitudes, beliefs, and values of the issues are examined and then the segments are profiled on their behavior and demographic characteristics. This ensures a complete picture of their ABC’s (Attitudes, Behavior, and Characteristics) as the basis for providing strategic guidance to various groups in government, non-profit organizations, corporations, and the public at large.

The data were examined using a proprietary cluster analytic program to assess the issue importance data and create a number of attitudinally homogenous segments who were seeking the same benefits and thus, were more likely to respond uniformly to communications targeted at them. A number of solutions were examined and the four-cluster solution was chosen based on its face validity and ability to differentiate the population on a number of behavioral and demographic characteristics.

The four segments are: 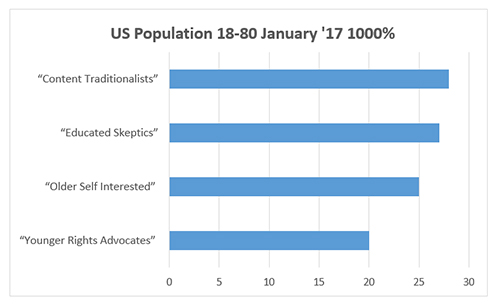 The Fishlinger Optimism Index tm. is a composite measure derived from advanced analyses of how optimistic the American population is on a number of dimensions including domestic and foreign policy, national leadership, social progress personal prosperity, and world affairs. It is published on a monthly basis and analyzed by the segments on a semiannual basis. 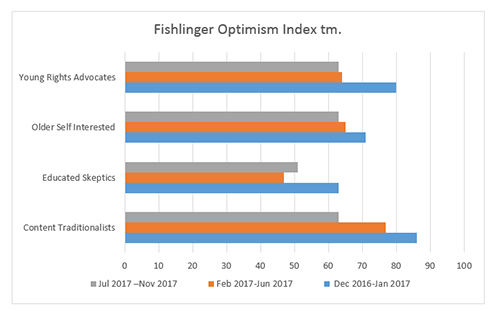 All four segments fell significantly in optimism during 2017, including the most pro Trump group the “Contented Traditionalists.”

The “Younger Rights Advocates” tend to view these issues to be much more important than the other segments. They are also more likely to believe in a positive future for the US and to value an exciting, stimulating life. Demographically, they are more likely to be younger, liberal, Democrats who voted for Hilary Clinton and live in urban areas. Behaviorally they are active users of social media and likely to work as volunteers and on community problems. 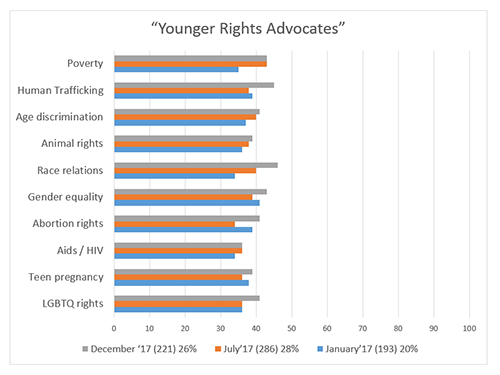 In the course of the year, this attitudinal group increased in size and ascribed more importance to LGBTQ rights, race relations and poverty. Interestingly, however, gender equality did not rise in importance during this period and will be important to watch in the coming year. Most of the publicity on sexual harassment resignations occurred toward the end of the year.

The “Older Self Interested” tend to view these issues to be much more important than the other segments. They are traditional in their beliefs and values. Not surprisingly, they tend to be older, moderate, Republican/Independent yet were more likely to vote for Hilary Clinton. Behaviorally, they are heavier TV watchers and less likely to be involved in community activities and volunteerism but more likely to be donors. 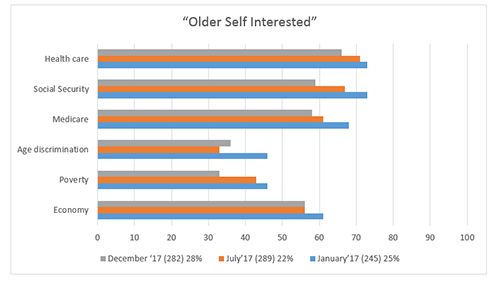 This group stayed about the same size. Among this group, concern for healthcare, social security and age discrimination fell in importance as the economy and stock market prospered. A change in the economic outlook in 2018 could cause these issues to rise in importance.

The “Educated Skeptics” tend to view these issues to be much less important than the other segments. The exception is issues dealing with individual rights. They appear to be somewhat cynical ascribing much lower importance to a number of issues. They are skeptical in their beliefs about the environment and from a values perspective seek brotherhood and equal opportunity for all. Demographically, they are young, very well educated, center left democrats, voted for Hilary Clinton, less likely to have a religious preference. Behaviorally, they are social media users and more prone to be involved in volunteerism and solving community problems. 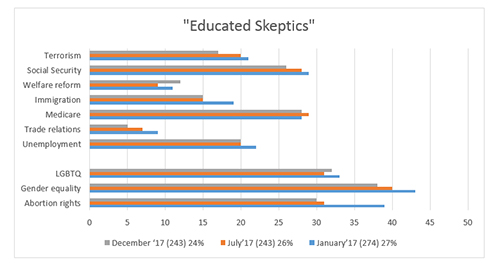 This group increased somewhat in size but did not change much attitudinally over the course of the year. They were skeptical at the beginning of the year and the start of the new administration, and remained so throughout the year. This pattern is likely to continue.

The “Traditionalists” tend to view economic and international issues to be much more important than the other segments. They are more likely to feel that economic and world issues that relate to the economy are important. They believe terrorism is a severe threat and that a number of programs need revamping.  Their values are conservative. Demographically they are older, well-educated, upscale Republicans who were much more likely to vote for Donald Trump. Behaviorally they are more likely to give money to charitable causes they support. 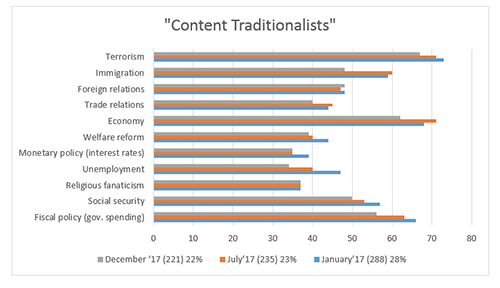 This group reduced somewhat in size, perhaps in response from the traditionalists to the new administration, but continued to feel comfortable and confident in the rising economy. They expressed less concern with lower importance placed on immigration, unemployment, and the economy.

ABC Summary of the Attitude Segments

The following table displays the segments in terms of their ABC’s (attitudes, behavior, characteristics.) 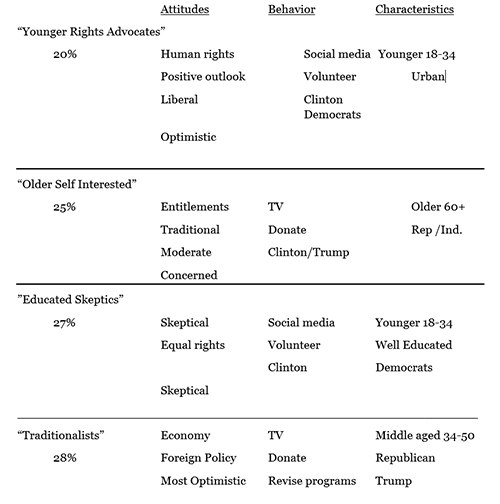 The Fishlinger Center conducts online national surveys focusing on political issues in the United States. The fieldwork for the polls is conducted using a blended national panel from Survey Sampling Inc. Interviews were conducted November 30 through December 15, 2016 and January 3 through December 15, 2017. The credibility interval for a sample of 1,000 is plus or minus 4 percentage points. The credibility interval is larger for subgroups and for differences between polls.