Riverdale, N.Y. – The new Fishlinger Center for Public Policy Research at the College of Mount Saint Vincent seeks to foster meaningful dialog on key public policy issues through independent, objective public opinion research. This initial survey focuses on social issues in the United States and the first report concentrates on human trafficking. Reports on other social problems covered in the survey will be released in the coming months.

The crime of human trafficking, is a pervasive problem, affecting more than 20 million people worldwide according to a 2014 U.S. State Department report.

While most Americans say human trafficking is a serious problem that is not being addressed very well in this country, it is also largely thought to have limited impact in the United States. Few people are aware of organizations within the United States that work to combat human trafficking or are willing to get involved in working toward a solution, according to the nationwide Fishlinger Center poll.

What is Human Trafficking? 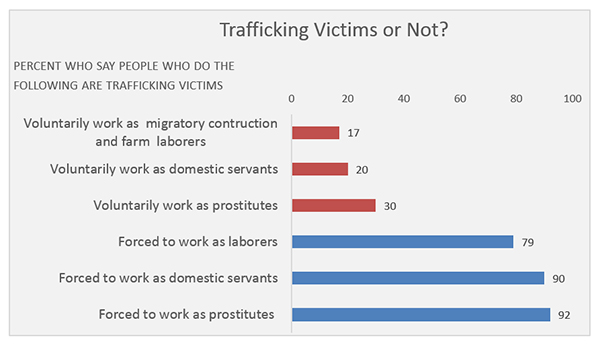 The poll found large majorities think any type of involuntary activities to constitute human trafficking. About 9 in 10 say people who are forced to work as domestic servants or those working in prostitution against their will are victims of human trafficking. Nearly as many, 79 percent, consider the coercion of farm laborers and migratory construction workers to be human trafficking.

These results illustrate some of the problems with the definition of human trafficking. Of those who said voluntary prostitution was not trafficking, nearly two-thirds mentioned the lack of force as the determining factor.

Obviously, holding people held against their will and physically forcing them into commercial sex or unpaid labor is criminal. But in reality, much human trafficking is more subtle. Individuals in vulnerable situations may originally consent, even sign a contract. But if anyone is compelled into staying at a job because of physical abuse, threats against family or overwhelming debts, their consent is beside the point.

According to the United Nations’ Office on Drugs and Crime, an adult’s consent to participate in prostitution or labor is irrelevant if he or she is held in service through psychological manipulation or physical force. And the prostitution of children under age 18 is considered human trafficking by federal and international law, regardless of consent or the lack of any coercion.

Human Trafficking in the United States

Three-quarters of the public say victims of human trafficking are mostly foreign nationals. While it is true that most human trafficking takes place outside the United States, this country is still a source and destination for men, women, and children used for commercial sex and forced labor.

Reliable statistics related to human trafficking are difficult to establish. It is a furtive crime and few victims and survivors come forward for fear of retribution, humiliation, or even a lack of realization of what is happening to them.

Human Smuggling into the United States

Although human trafficking is often an international crime that crosses borders, that is not necessary.  Victims can be trafficked within their own country or community.

Smuggling is considered different crime altogether. Illegally moving people across international borders with their consent is not viewed as human trafficking. Most people who unlawfully enter the United States are smuggled rather than trafficked.  However, some can become victims of trafficking, if they are then coerced into forced labor or prostitution.

The Public’s Familiarity with Human Trafficking 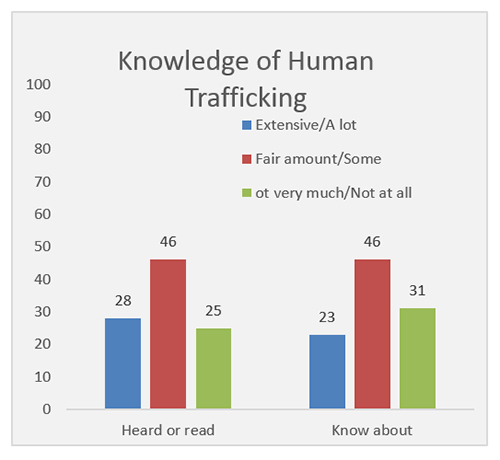 About 3 in 10 are aware of the recent negative publicity surrounding nail salons that largely stemmed from an investigative series in The New York Times. More than half mentioned poor working conditions or toxic chemicals and about a third cited low wages or forced labor as source of the adverse news. Both problems were the basis of the news articles.

Working toward a Solution

Few of those surveyed have first-hand experience with the problem, and only about a third regard the problem as widespread in the United States. The absence of much personal connection with human trafficking could account for the lack of interest in participating in remedies for the problem. Only a quarter of the public said they were extremely or very interested in getting personally involved.

In addition, few people are aware of programs working to combat the problem.

In April, the United States Senate passed an anti-trafficking bill, intended to increase penalties for perpetrators and patrons of trafficking, improve support for victims and strengthen the ability of law enforcement to investigate. This legislation had been delayed for about six weeks when Democrats withdrew their support for the bipartisan bill over an anti-abortion provision. 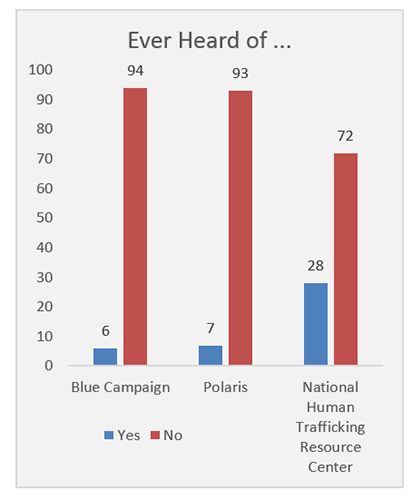 Fifteen percent of the public said they were aware of the controversy surrounding this legislation, but few could actually say what the disagreement was over.

Six percent of the public said they have heard of the Blue Campaign, efforts from the U.S. Department of Homeland Security (DHS). The Blue Campaign is the voice of the DHS work to raise public awareness and train law enforcement to increase detection of human trafficking.

The National Human Trafficking Resources Center (NHTRC), an anti-trafficking hotline and resource for victims and survivors in the United States, Is familiar to 28 percent of the public. The NHTRC is operated by Polaris, a non-profit organization that works to fight human trafficking throughout the world. However, only 4 percent of the public say they know a number to get in touch with the hotline.

Polaris, itself is even less well-known: seven percent have heard of the organization.

Perhaps not surprisingly, West Coast residents tend to be more informed about these organizations than people who live in other parts of the country. More familiarity with trafficking victims would lead to awareness of groups whose mission is to help those who have been targeted by traffickers.