Public confusion is one thing, but some subjects provoke quizzical and sometimes dismissive frowns even among colleagues from different departments. Recently, Times Higher Education featured nine academics who set the record straight about what they do—and why it matters. Among the contributors: Mount Saint Vincent’s very own Cynthia B. Meyers.

Media studies: Keeping up with the Kardashians 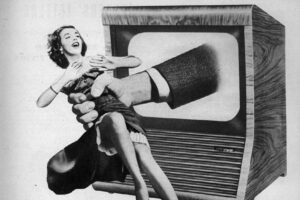 As a media studies scholar, I have had to make clear to puzzled fellow academics that I don’t analyse the news, measure media effects or write television reviews. And I’ve watched eyebrows furrow as I explain that my opinions on the quality of various films and television programmes are not relevant to my scholarship.

Media studies is a subject area rather than a discipline, encompassing a wide range of topics and a variety of methodologies. The thesis of my MA in communications was on the advertising industry of the 1950s and ’60s, and my PhD in radio-television-film focused on the role of the advertising industry in early broadcasting. I took courses in many departments, including art history, sociology, American studies and history. My training encompassed social scientific, literary and historiographical theories and methodologies, and I have published in journals specialising in cinema, radio, history and American studies. My colleagues can be found in a bewildering number of programmes, including English, speech, film, communication, theatre, journalism, advertising, rhetoric and a variety of social science departments.

But questioning the relevance of media studies to the academic project is still not unusual. Some academics assume that news media is the only form of media worth studying because of the importance of accurate information to the functioning of a democratic society. Media designed for entertainment is suspect, perhaps because it is fictional, and media designed for selling is likewise suspect because it exists for commercial purposes.

This suspicion is embodied in the vast amount of social scientific research on the effects of mass media (and, now, social media), particularly on young people – who, for centuries, have been regarded as unduly susceptible to new media forms. But even social scientific media scholars are often baffled by humanities-based media studies: if not to count units or measure outcomes, thereby quantifying media’s impact and relevance to our society, what is the point?

The earliest humanities work in media was done by scholars trained in literary analysis, who worked to elevate films and television programmes into authored texts worthy of scholarly analysis. For example, by renaming 1940s detective films based on pulp novels as “film noir”, they imparted value to commercial cultural forms previously dismissed by elites. (Notably, much of such cultural legitimation tends to focus on media texts from several decades past.) But some academics continue to question humanities-based approaches as mere film reviewing, fandom or glorified journalism.

There are differences between journalism about media and media studies scholarship. Journalistic film or television criticism cannot include information that could “spoil” the experience for audiences. News coverage of media products serves a promotional purpose and much of it is designed to serve industry interests (trade publications rely on advertising from the industry they cover). Media studies scholars, in contrast, analyse the media text as a whole. And many study how media texts are produced, delving into primary sources and drawing upon historical context for analysis, rather than parroting the views of industry insiders. Others study reception and fan culture, employing a variety of methodologies for analysing audiences’ interpretative processes.

Academia can be a social hierarchy that reflects the values of its elites. My claim that the Kardashian/Jenner family is worthy of study from a variety of disciplinary and methodological perspectives, for instance, has elicited horror among colleagues who find reality television trite and the Kardashians crass. But, as a media studies scholar, I find value not in any personal enjoyment of the Kardashian/Jenner oeuvre, or any claim about its absolute aesthetic quality. I find it, rather, in the opportunity it gives us to understand the culture of its often-overlooked young and female audience. For this demographic, the Kardashians/Jenners have produced significant, long-running cultural texts. They have also marketed a wide range of products, built media organisations and innovated cultural forms – all of which may repay visual, rhetorical, social, cultural and industrial analysis.

Indeed, I would argue that analysing such commercial media forms, practices and institutions is crucial to understanding our world. Therefore, it is central to the academic project.