Home / Interning Her Way to Her Dream Job

Interning Her Way to Her Dream Job

From the North Shore of Massachusetts to North Riverdale in the Bronx, Christina Rasmussen ’20 has had some impressive writing experiences in and outside the classroom.

“I’ve always wanted to write for a publication or organization as a gateway to journalism,” she said. “I like telling people’s stories.”

A communication major and writing minor, she’s had the opportunity to explore various creative writing outlets during her four years at the College. In her lifelong pursuit of her dream to become a writer, Christina appreciates that the Mount has offered her numerous writing classes with topics changing every semester—for example, last year she took a drama class taught by Associate Professor of English Anthony Lee, allowing her to explore her playwriting abilities. 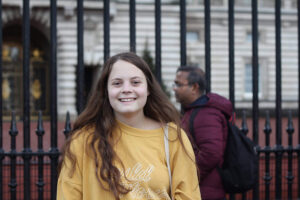 “The Mount’s classes offer an abundance of writing outlets, which has helped a lot as I work to master my craft,” Christina said.

And though she enjoyed her time as a scriptwriter, it also helped her realize her true passion: journalism.

Originally from Lynn, Mass., Christina was drawn to the Mount for many reasons, but especially because of its New York City location. She knew the close proximity to Manhattan, as well as the numerous potential job and internship opportunities would be key, with numerous newspapers, magazines, and publications—with worldwide influence and readership, no less—just a stop away on the subway.

“I really love New York,” she said, “but I’m also thankful for the opportunities I’ve had in my hometown.”

Last summer, Christina spent 130 hours interning for Wicked Local, reporting and writing for up to ten newspapers from late May to mid-August. She chose the internship because it was close to home and it allowed her to know a lot of local people and to delve deep into stories about her local community.

Christina was in the office three days a week and spent her time shadowing reporters who gave her advice on how to hone her interviewing skills. “The one-on-one interaction with the reporters helped me a lot,” she said. “My first day, I had three assignments—the reporters shared contacts, but it was up to me to set up the interviews, get quotes, and write the stories.” 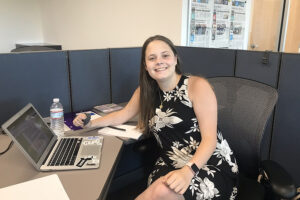 By the end of her internship, she got to cover two front-page stories—and she was even interviewed by the media group’s podcast, Book Nation, which explored her experience and reading habits as a college student.

An avid aspiring journalist, Christina also contributed to her alma mater’s alumni magazine while home during the summer break. She worked with St. Mary’s High School to create spotlights featuring what students were doing and what alumni had accomplished.

Then, last Fall, Sr. Patricia McGowan, S.C., Associate Professor Emerita of Communication in the Division of Communication, Art, and Media told Christina it would be a great idea to intern for The Riverdale Press. She agreed and landed the internship with a little help from the Oxley Integrated Advising Program.

During her time with The Riverdale Press, Christina learned about the rigorous deadlines of the newspaper world. She also got to know the Riverdale and Bronx community through people’s stories and was able to get her byline on two features:

Theatre group crafts its own dragon story for charity 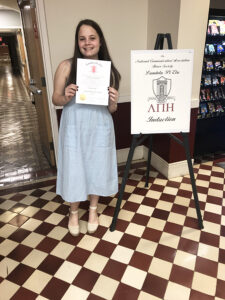 That same semester, she even took an online news class and conducted an independent study with Sr. McGowan, analyzing how biased and unbiased certain political newspapers are.

When she’s not writing, interviewing, going to class, or studying, Christina is involved in the Lambda Pi Eta national communication association and is a Student Government Association senator. She also studied abroad at St. Mary’s University in London. 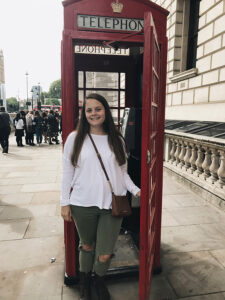 “Without the Mount, I wouldn’t have had the opportunity to travel to London and study with the professors and other students at St. Mary’s,” Christina said. “I got to see a new culture and develop my writing from a new perspective through the classes I took, the friends I made, and the work I did. It only enhanced my dreams of pursuing journalism and writing as a career and allowed me to make so many new friends that I’ll have for the rest of my life.”

After graduation, Christina plans to return home and work as an entry-level reporter for a local newspaper or an online publication like HuffPost.

Her advice for students who aspire to write? Take advantage of internship opportunities.

“Both my internships were great experiences. If you’re passionate about a career, there’s an internship waiting for you—so go for it!”