Since 2012, Up to Us has engaged the next generation of leaders on the importance of addressing the country’s fiscal challenges.

In 2019, Mount Saint Vincent student leaders joined the cause, along with representatives from nearly 100 colleges and universities nationwide, for the non-partisan campus-based initiative that aims to mobilize young people to promote fiscal responsibility.

And today, Wantoe T. Wantoe ’22, Gesselle Sanchez ‘22, Emily Perez-Garcia ‘22, Brendjeen Pierre ’22, Chadwyck Watt ‘22, Deidra Scott ’20, and Ian Santana ’20 have an ambitious campaign goal: obtain 800 signatures for the Up to Us campaign petition. The winner of the campaign will be awarded $10,000 to sponsor their campus activism.

“The competition acts as leadership development about how to make an impact on civic issues that we care about,” Wantoe said. “Our main task is designing and implementing a nonpartisan campaign about the impact of national debt and to start a conversation about the United States fiscal and economic challenges.”

The Mount team is dedicated to their cause on raising awareness on campus and beyond about the national debt and its effects on the financial burden on students—and they’re getting recognized for it. In November, the students’ activism won the best mid-campaign competition with the best Day of Action Campaign.

“For our Day of Action, we realized that intensive awareness must create a space for dialogue and should comprise innovative solutions since we are competing against very impressive colleges,” Wantoe continued. “We believe this would create easier access of complementing the tremendous efforts of Up to Us by providing student and faculty perspectives on the growing fiscal debt and solutions for sustainability.”

To this end, the student leaders launched a research project focusing on U.S. fiscal issues in collaboration with the Class of 2022, the Center for Undergraduate Research, and the Fishlinger Center for Public Policy Research. The students also organized a discussion panel with the Mount’s Model United Nations club and the Class of 2022, focusing on climate change, racial and economic inequality, and homelessness—three cardinal issues that would require a sustainable fiscal future. To raise even more awareness, the team visited classrooms, informed students passing by the Office of Campus Ministry about the campaign, and attended a Student Government Association meeting to gain signatures from student representatives and leaders from nearly every club and organization on campus.

Their work didn’t stop with student involvement. On November 15, the Mount’s Up to Us team consulted with President Charles L. Flynn, Jr. who also pledged his support. “He is passionate about students being aware of the impact of policies on their future and having an independent ambition to develop, adopt, enforce, and implement needed solutions,” Wantoe said. 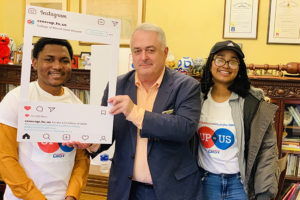 And on November 17, the campaign members attended the On-Site Application Day admission event, along with 17 student clubs and representatives from various academic departments. At the event, team members shared the central value of the campaign and how this could critically enhance the students’ awareness and civic decision-making process with the Provost, Senior Vice President for Admission and External Relations, and the Dean of the College. Additionally, the group has initiated campus-wide awareness efforts across campus, engaging students and various residence halls to have an open dialogue with students and faculty about their opinions on these issues.

The campaign originated on the College campus when Wantoe applied to be a team leader in the Up to Us competition, which is an affiliated program of Net Impact, a global network of local chapters on university campuses in cities and in companies. The network inspires and equips emerging leaders to build a just and sustainable world through programs, campaigns, and events. Each network chapter leads a global impact of building leadership skills and experiences and establishing a network of allies for sustainable lifelong impact. 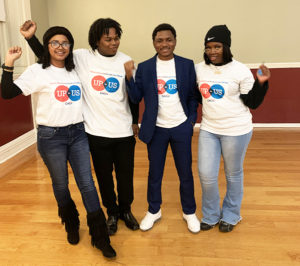 Help support our Mount student leaders—sign the Up to Us petition today!