Home / Lack of Opportunities in Higher Education: Fault of the Individual or Society?

Lack of Opportunities in Higher Education: Fault of the Individual or Society?

This is the fifth report from the survey; the earlier reports concentrated on human trafficking, the lack of affordable health care, root causes of poverty, and domestic violence. Additional reports on other social problems covered in the survey will be released in the coming months.

Nearly two-thirds of Americans consider the lack of educational opportunities in the United States to be a serious problem. More than half of the public see the failure of achieving a college education to be more an individual’s responsibility rather than society’s, however there are substantial differences by age and income.

Two-thirds describe the lack of educational opportunities in the United States to be extremely or very important, and nearly as many consider it to be a serious problem.  Younger people, who presumably have recent experience with formal education, are more likely to view this as an important issue than older Americans. 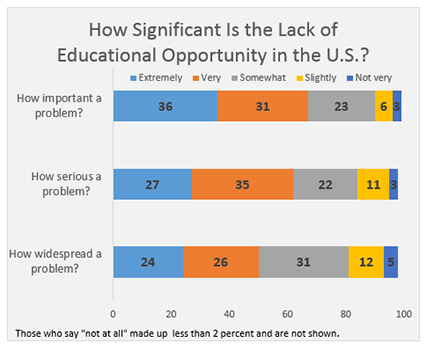 In recent years, while the high school graduation rates have increased, the percentage who immediately enroll in college has decreased, according to the National Center for Education Statistics.

There is widespread agreement that educational opportunity is not an issue that is being adequately addressed in this country. Only 20 percent say it is being dealt with to any real extent.

No College Education:  Fault of Individual or Society?

According to a report recently issued by the American Council on Education, college enrollments in two- and four-year institutions among recent high school graduates has declined in recent years. But that drop has been most significant among the lowest-income students. 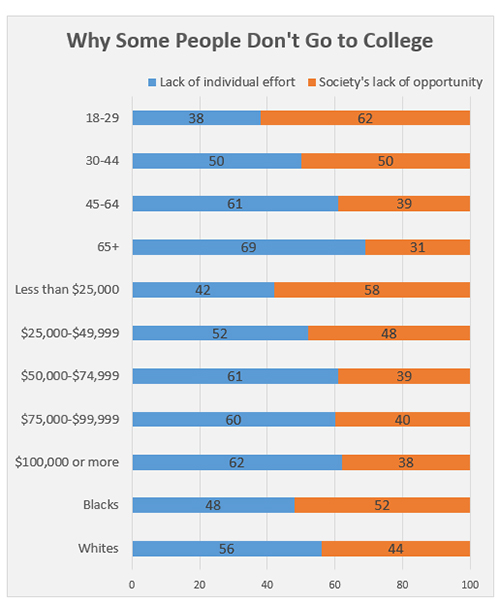 While most Americans say the lack of higher education is caused more by the individuals’ effort rather than lack of opportunity, blacks, younger, and less affluent people are more inclined to blame society than whites, older people or those with higher incomes. Americans who are familiar with diminished prospects for a college education are also more inclined to say the lack opportunity is more at fault, rather than insufficient efforts on the part of a person. Thirty-seven percent say they know someone personally who has experienced a lack of education opportunity. Two-thirds of them blame society for this. The opposite is the case for people who are not familiar with anyone who has had less chances to attend college. Two-thirds of them hold the individuals themselves responsible.