The economy and health care are the top concerns of Americans, while issues that may not affect the majority of the public personally, such as LGBT concerns or teen pregnancy, are viewed as less crucial.

At the same time, the public is more optimistic about the future of those issues they personally consider important, while they are less sanguine about the prospects of those problems they are personally less concerned about.

Analysis of a recent surveys conducted by the Fishlinger Center for Public Policy Research at the College of Mount Saint Vincent suggests there are considerable differences among the public in their current concerns and expectations for the future.

The analysis is based on nationwide surveys conducted December 2016 and January 2017, January 2017 to June 2017 and July to December 2017. This report focuses on the initial survey results. Subsequent reports will focus on tracking these results over time. 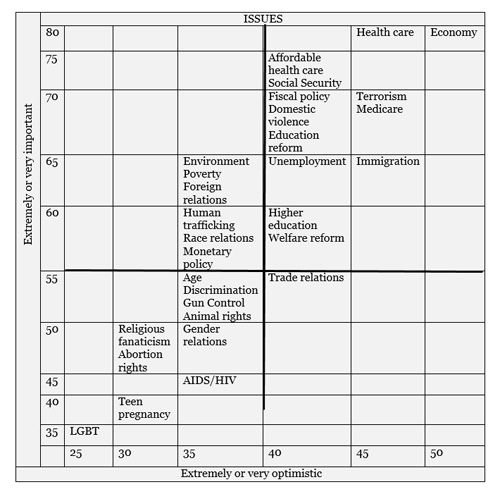 Looking at the population as a whole is an important first step; however, it tends to mask underlying differences among subgroups of the population. Further analysis identified four attitudinally homogeneous groups: “Younger Rights Advocates,” “Older Self-Interested,” “Educated Skeptics,” and “Content Traditionalists.” These differ significantly regarding the priority they place on different social issues.

Younger Rights Advocates
“Younger Rights Advocates” tend to be liberal Democrats who voted for Hillary Clinton and live in urban areas. Under age 35, they tend to be active users of social media and are more likely than other Americans to work as volunteers and on community problems. With the exception of poverty, this group gives more importance to issues on the lower end of the spectrum than the rest of the public. 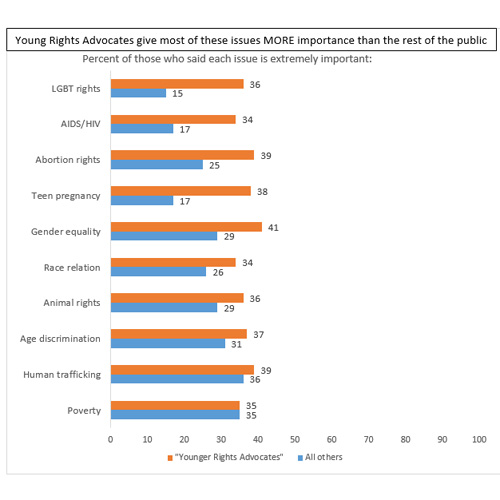 Older Self-Interested
The “Older Self-Interested” segment of Americans are aged 60 and older. They are Republicans or Independents who describe themselves as politically moderate and are more likely to have voted for Hillary Clinton than other Republicans. Rather than using social media, they are more inclined to watch television. While likely to donate to causes, they are less inclined than younger Americans to volunteer or become involved in community activities. They are traditional in their beliefs and values and tend to place more importance on issues that affect older Americans. 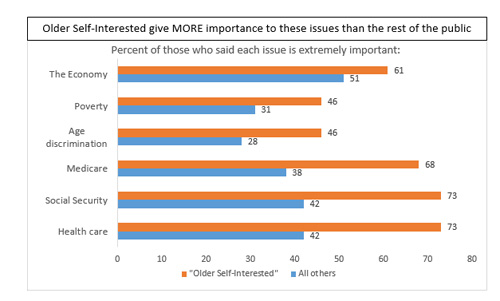 Educated Skeptics
“Educated Skeptics” are somewhat similar to “Young Rights Advocates” demographically and behaviorally. They are Democrats under 35 who voted for Hillary Clinton. They are also social media users and prone to be involved in volunteerism and solving community problems. However, they are more educated and less likely to have a religious preference than “Young Rights Advocates.” This group is less inclined than other Americans to ascribe personal importance to issues like terrorism, welfare reform, or immigration.  But they are more likely to consider questions about individual rights personally important. 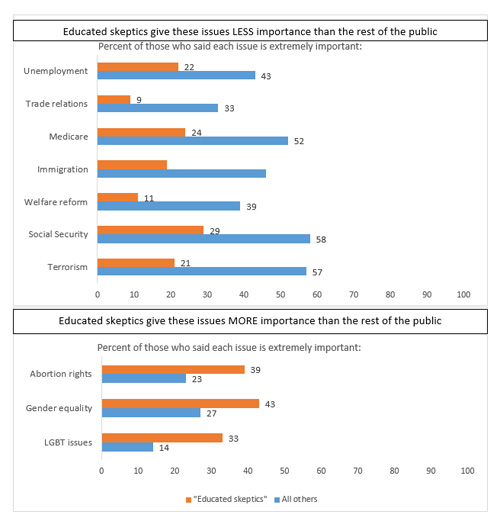 Content Traditionalists
“Content Traditionalists” tend to be middle-aged, well-educated, affluent Republicans who were likely to vote for Donald Trump. They tend to donate money to charity rather than time. They generally have conservative values and regard economic and international issues as important. 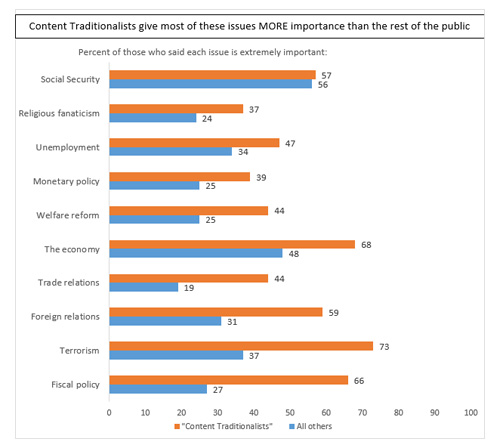 ABC Summary of the Attitude Segments

The following summary table displays the segments in terms of their attitudes, behavior, characteristics. 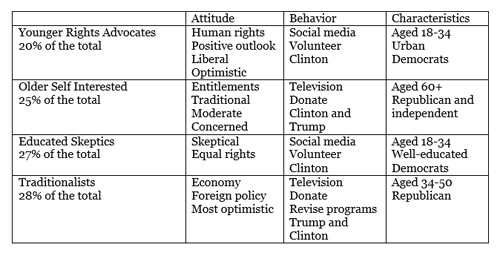 Future waves of the study will examine changes in these groups over time, as well as compare them on current issues faced in the country. The results will be reported semi annually.

The Fishlinger Center conducts online national surveys focusing on social issues in the United States. The fieldwork for the polls is conducted using a blended national panel from Survey Sampling Inc.  Interviews were conducted November 30 through December 15, 2016 and January 3 through January 31, 2017 and repeated February 1 through June 30, 2017 and July 5 to December 15, 2017. The credibility interval for a sample of 1,000 is +/- 4 percentage points. The credibility interval is larger for subgroups and for differences between polls.