News 12 at the Mount

Please note: This story originally appeared on News 12 The Bronx.

It’s a big accomplishment for an artist, selling your first piece, and one student at College of Mount Saint Vincent just got to experience that.

Brendan Ryan says he’s been creating art ever since he could pick up a pencil.

The senior at the College of Mount Saint Vincent had his painting, “Elephant in the Room,” on display at the Blue Door Art Center in Yonkers when he got an offer from Yonkers City Hall. 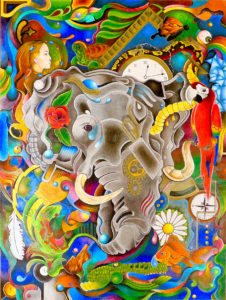 “Elephant in the Room”

“At first I was a little hesitant, [I] didn’t want to sell it,” says Ryan.

However, his professor, Enrico Giordano encouraged him, saying it would be a great opportunity and Ryan agreed, selling it to the commissioner of planning and development for the city of Yonkers.

It is now on display at Yonkers City Hall. Ryan says he was paid $1,850 for his work, and says that receiving that check was a big deal for him.

“It is different talking about it saying, ‘hey, I would like to buy your work’ and stuff like that, but actually seeing it, it is mind blowing,” says Ryan.

He says it is not just about the money though, a lesson Professor Giordano teaches in a program that combines communication art and media.

“It is really about following that passion and finding your voice, your district voice,” says Professor Giordano.

He says Ryan has found his voice creating work that he is proud of.

“If you look at that portrait very closely you won’t see a single mark not one mark, it looks like a photograph,” says Professor Giordano. “He focuses like a laser on what he is doing.”

Ryan, who is from Cedar Run, New Jersey, hopes to keep that focus going, by continuing on to graduate school and studying architecture.

He says art will always be his passion.

“I am an artist, through and through,” says Ryan.