The Fishlinger Optimism Index™, a breakthrough measurement of public opinion centered on Americans’ optimism about the future from the Fishlinger Center for Public Policy Research at the College of Mount Saint Vincent from 56 in March to 58 in April 2018. 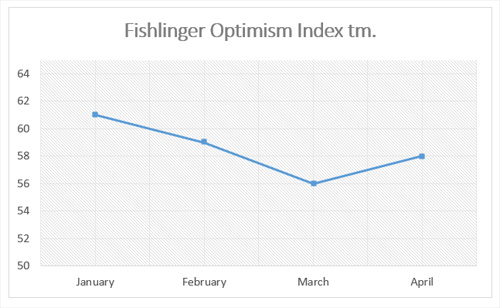 After a very rough March, overall optimism and dimensions of federal policy, national leadership, social progress, personal prosperity, and world affairs all bounced back to previous levels in April. This was undoubtedly bolstered by perceptions of a continued strong economy and progress with North Korea and perhaps by the controlled but decisive action in Syria, with admonishment of both Russia and Iran. 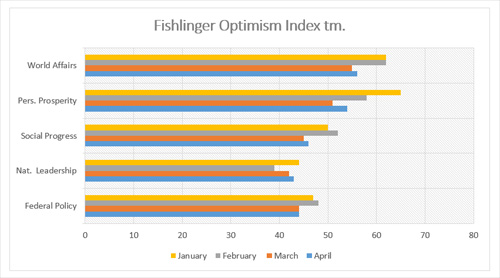 President Trump’s problems continue with his personal attorney Michael Cohen’s dealings and personal physician Ronny Jackson being forced to withdraw from appointment as VA secretary. Judicially, President Trump’s DACA cancellation was not upheld by the courts and his travel ban to selected countries is being seriously questioned.

In this study, the Fishlinger Center conducted online national surveys focusing on political issues in the United States. The fieldwork for the poll was conducted using a blended national panel form Survey Sampling, Inc. Interviews were conducted April  1-29, 2018. The credibility interval for 1,000 respondents is plus or minus four percentage points. The credibility interval is larger for subgroups and for differences between polls.