Few pollsters or pundits expected Donald Trump’s Electoral College win last month. A Hillary Clinton victory was predicted by forecasters and reinforced in the media.  In an election year rich in data with state-of-the-art methods of analyzing it, the question is:  What happened?  The pre-election errors of the polls and media have already been the focus of several academic and professional polling symposia, and will undoubtedly be the main topic for months to come.

However, poll analysis that suggested a close contest for president was rare, and most forecasters gave Mrs. Clinton a very high probability of winning.  The pervasive assumption was that Mrs. Clinton was sure to prevail on Election Day – with both the popular vote and the Electoral College.

A re-examination of the Fishlinger Center’s pre-election surveys suggest there may have been hints of the softness of Mrs. Clinton’s support as dissatisfaction with the current state of affairs in Washington fueled Mr. Trump’s supporters.

The national exit poll conducted for the television networks and The Associates Press by Edison Research got similar results: 62 percent of voters said the country was on the wrong track, and 68 percent of them voted for Mr. Trump. 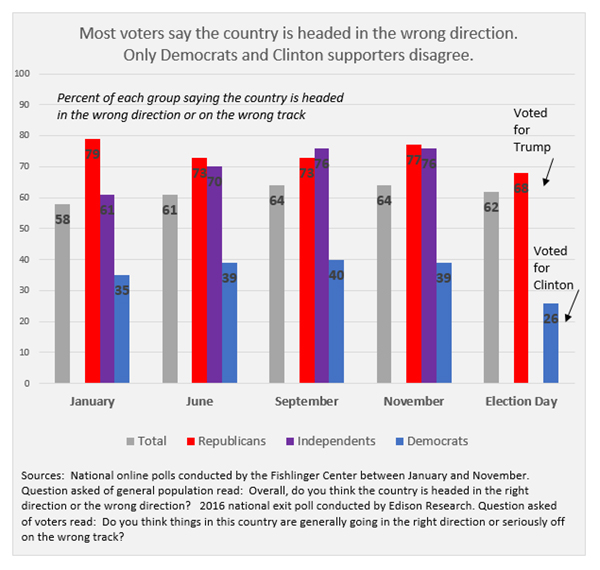 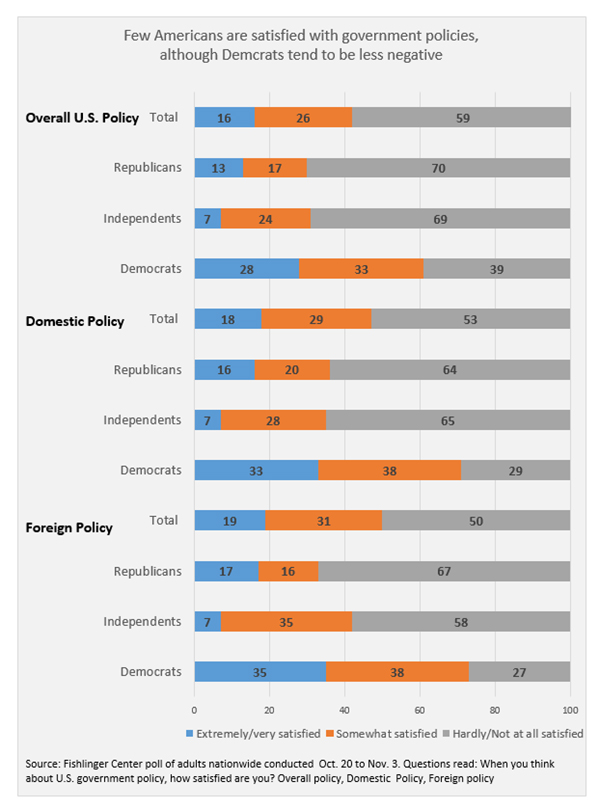 Similarly, in the exit poll, 7 in 10 voters had a negative view of how the federal government is running, and more than half of them voted for Mr. Trump.

While most Americans are unhappy with the government’s policies, it does not appear that President Obama is getting the blame.  More than half, 53 percent, of the voters in the exit poll, approved of Mr. Obama’s job performance. However, the positive feelings toward the Obama administration seems to be more for Mr.  Obama himself, rather than his policies.  Only 28 percent of voters said the next president should continue Mr. Obama’s policies.  Nearly half, 47 percent, said the next president should change to more conservative policies and more than 8 in 10 of those voters backed Mr. Trump. 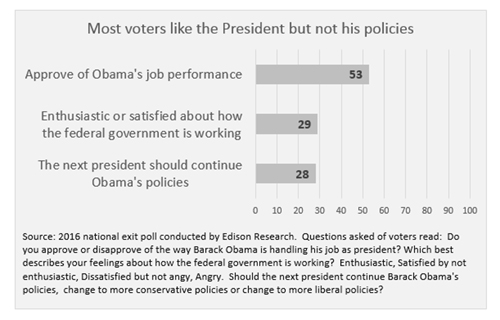 Presidential job approval has been a strong indicator of whether or not an incumbent is elected to a second term.  But history is mixed regarding the effect of an incumbent’s popularity on voters’ selection of the successor.  At the end of his eighth year in office, Ronald Reagan earned approval ratings similar to Mr.  Obama.  And the Republican nominee, George H.W. Bush, was elected in 1988.  However, two presidents with even higher approval ratings – Dwight D. Eisenhower and Bill Clinton – were not succeeded by their party’s nominee.  Both Al Gore in 2000 and Richard M. Nixon in 1960 were narrowly defeated.  In fact, like Mrs. Clinton, Mr. Gore won the popular vote, but ended up losing the Electoral College.

The Fishlinger Center conducted online national surveys focusing on political issues in the United States ahead of the 2016 Presidential election.  The fieldwork for the polls is conducted using a blended national panel from Survey Sampling Inc.