Home / The Problem of Drug Addiction in the United States

The Problem of Drug Addiction in the United States

More Americans now die every year from drug overdoses than they do in motor vehicle accidents, according to the Centers for Disease Control and Prevention. The rise of heroin-related deaths has been particularly sharp.

Nearly three-quarters of Americans consider drug addiction to be a serious problem in this country. Sixty percent of the public knows someone who has struggled with substance abuse, and 62 percent consider the problem to be widespread. Few Americans say drug addiction is being adequately addressed.

In an effort to combat the growing epidemic of prescription painkiller and heroin abuse, the Obama administration announced in February that it would ask Congress to spend an additional $1.1 billion next year to combat the growth by expanding treatment facilities, developing programs intended to prevent prescription drug overdoses, and cracking down on illegal sales.

This is the sixth report from the survey; the earlier reports concentrated on human trafficking, the lack of affordable health care, root causes of poverty, domestic violence and the lack of educational opportunities. Additional reports on other social problems covered in the survey will be released in the coming months.

The poll was conducted online May 14 to 26, 2015 with 1,253 adults. Field work was conducted by IPSOS Public Affairs. Blacks, Hispanics, and Asians were sampled at a higher rate than their proportion of the population for reasons of analysis.

According to the 2013 National Survey on Drug Use and Health, more than 9 percent of Americans ages 12 and over were illicit drug users. The percentage of drug users within white and black communities is roughly equivalent: 9.5 percent for whites and 10.5 percent for blacks. 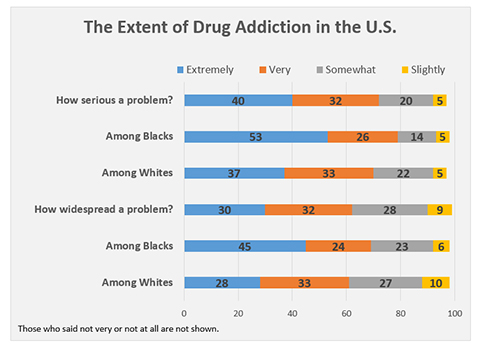 Sixty percent of the public say they personally know someone who has experienced drug addiction. They are more likely to say they know a lot about the problem, more likely to consider it an important issue and more inclined to say they are interested in working toward a solution. 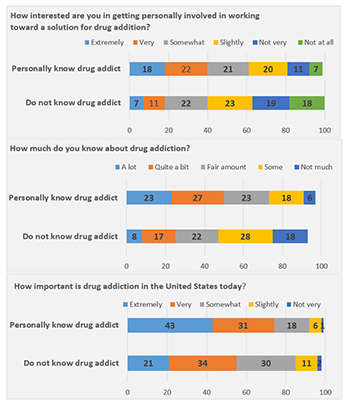 The public was asked if they thought drug addiction was the result more of individual choices or social factors. Most Americans said people are responsible themselves for their addiction—regardless of age, race, education, or experience with a substance user. While college graduates, adults under 30, and blacks are slightly more inclined to blame societal factors for substance abuse, still a majority of these groups agree that an individual’s choices is the cause of their problem.

The poll did not ask about genetics. According to the National Institute on Drug Abuse, a person’s risk for addiction is influenced by a combination of factors, including individual biology, their social environment, and their age.

The fieldwork for the Fishlinger Center poll was conducted by Ipsos Public Affairs.  Online interviews with 1,253 adults were collected May 14 to 26, 2015. Sampling for the survey used a blended approach, combining the Ipsos iSay panel with Ampario sample (a blend of external panel and non-panel sources). Ipsos measures the precision of its online surveys using a credibility interval to measure sampling error. The survey of 1,253 respondents has a credibility interval of plus or minus 2.8 percentage points. The credibility interval may be larger for subgroups. The poll is subject to other potential sources of error, including, but not limited to coverage and measurement error. Data were weighted to match the national population on age, sex, Hispanic origin, and race.  For purposes of analysis, black, Hispanic, and Asian respondents were oversampled. These groups were then weighted down to their proper proportion of the population.