This story originally appeared in The New York Times.

She joined the Sisters of Charity in New York in 1956 and taught at her alma mater, the College of Mount Saint Vincent, until 2019. She died from complications of the coronavirus.

Sister McGowan joined the Sisters of Charity of New York at 17 and began her teaching career in 1959 at St. Brigid’s elementary school in Manhattan, where she taught fourth-graders. She later taught journalism and communications at the College of Mount Saint Vincent in the Bronx, her alma mater, where she lived in faculty housing.

As the years went by and the number of students she crossed paths with increased, Sister McGowan remained particularly good at remembering their names, as well as the names of their siblings, many of whom she had also taught. And many of her former students stayed in touch. One was a nurse at the hospital where she died and was with her at the end. 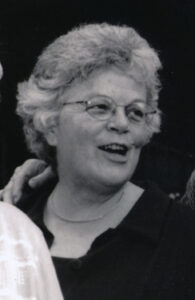 She joined the Sisters of Charity in New York in 1956 and taught at her alma mater, the College of Mount Saint Vincent, until 2019. She died from complications of the coronavirus.

Patricia Elizabeth McGowan was born on June 5, 1939, in Manhattan, the youngest of four children of Cormac and Anna McGowan. Her father, an Irish immigrant, worked in the insurance business and managed a bar.

Mount Saint Vincent asked Sister McGowan to return as a journalism professor in 1981, and she went on to teach there full time for 28 years, nine of them as chairwoman of its communications department. She became a part-time instructor in 2009 and retired in 2019. She is survived by her sister Nancy Kavanaugh.

Sister McGowan was known for a quick sense of humor. On one occasion a police officer yelled at her for jaywalking in the Battery Park area. Wearing everyday clothes, she yelled back, “Don’t you have anything better to do than to yell at a nun?”

Her knowledge of New York was encyclopedic. Everywhere she went, she had a memory or a fact to share about the city. When not teaching she painted in water colors and could devour 10 books a week.

When one of her brothers died of cancer at 46, her relationship with his four children, all under 18, strengthened. She became an essential part of their lives. When they went off to college, she visited them regularly.

“She was part of the glue that kept everybody together,” Dr. Fenwick said.