Election 2016 – Before the F.B.I. Disclosure, Hillary Clinton was Leading and Most Voters Expect to See Her Win

In the final weeks before the end of the presidential campaign, Hillary Clinton, the Democratic candidate, enjoys a substantial lead over her Republican rival, Donald Trump.  However, the latest national poll from the Fishlinger Center for Public Policy Research at the College of Mount Saint Vincent was conducted Oct. 20 through Oct. 27, before James B. Comey, the F.B.I. director, disclosed that his agency was looking into a potential new batch of messages from her private email server.

The poll also shows that most voters expect Mrs. Clinton, the first woman nominated by a major party, to win the election on Nov. 8.

The race had tighten at the end of the summer, but Mr. Trump has faltered since the presidential debates and the release of the video tape in which he makes lewd comments about groping women.

It is not known yet what effect this latest chapter in the saga regarding Mrs. Clinton’s private email server will have with the voters.  Before the F.B.I. disclosure, voters who said they plan to vote for president this year gave 51 percent of their support to Mrs. Clinton and 37 percent backed Mr. Trump. 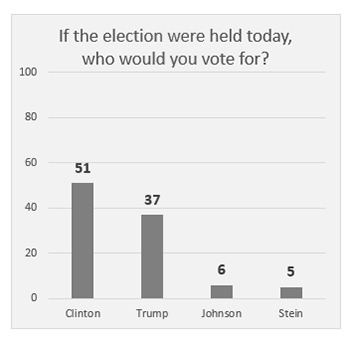 Gary Johnson, the Libertarian candidate has the support of 6 percent of those who plan to vote for president, and the Green Party nominee, Jill Stein, gets 5 percent.

Although the F.B.I. disclosure could reduce Mrs. Clinton’s lead in these last days of the campaign, few voters expect to change their minds before Election Day.  Sixty-seven percent of Mrs. Clinton’s supporters say they are completely certain that they will vote for her, and just about as many, 65 percent, of those who prefer Mr. Trump say they are completely certain to support him in the voting booth.

According to analysis by CNN, more than 18 million voters have already cast their ballot in the 37 states with early, no-excuse absentee or mail voting.

All year long, more voters have been expecting a Clinton victory party on Nov. 8, than a triumph for Mr. Trump.  In the latest poll, 65 percent of voters said Mrs. Clinton would win, and 32 percent said it would be Mr. Trump.

Mrs. Clinton is backed by most women, voters under 50, college graduates, Hispanics, African-Americans and voters living in cities and suburbs.  A majority of voters over 60 and those living in the rural areas support Mr. Trump.

As always, turnout will be important in determining the winner. Turnout increased in 2004 and 2008, but dropped slightly in 2012.  According to the United States Elections Project, 60 percent of eligible voters voted for president in 2004 and 62 percent voted in 2008.  In 2012, the number of eligible voters fell to 58 percent.

The ‘get out the vote’ organization of the Clinton campaign has been described as superior to the efforts of the Trump campaign.  However, many of the groups that strongly support Mrs. Clinton — such young voters and minorities — have traditionally been less likely to show up at the polls.  At the same time, less affluent and less educated voters – the source of much of Mr. Trump’s support – have also customarily been underrepresented on Election Day.  Will this year be different? 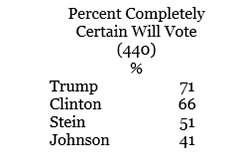 In terms of reported certainty that they will vote Trump supporters are slightly higher than Clinton supporters. Johnson and Stein supporters are significantly lower than the two major party candidates. Will this be a factor in a close election?