Ron Scapp, Professor of Humanities and Teacher Education, is receiving a lot of attention lately, in particular for his scholarly book, A Question of Voice: Philosophy and the Search for Legitimacy, which was published early last year, as reported here. 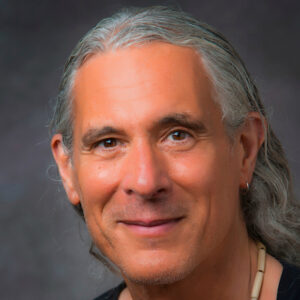 Over the summer, Dr. Scapp was informed that the Association for Ethnic Studies (AES) had bestowed one of its highest honors on the book. The Outstanding Book Award recognizes “those achieving a level of innovation, quality, and success in advancing the field of ethnic studies that few other books have done.” Dr. Scapp formally accepted the award at the Association’s annual conference, held virtually and on-site at Bowling Green State University, Bowling Green, Ohio, November 5-6, 2021.

And there’s more: the esteemed Faculty of Philosophy at De LaSalle University in Manila, Philippines, one of Asia’s premier universities, has embraced Dr. Scapp’s book and invited him to give the keynote for a conference next spring in Southeast Asia that will explore topics relevant to the book’s premise. 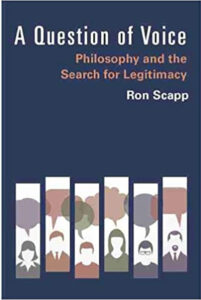 Recognition from these distinguished institutions shines new light on the Mount professor, whose prolific work ethic has generated several new publications in recent years. The AES calls A Question of Voice “the best combination of intellectual work and meaningful engagement with the themes, issues, and questions central to ethnic studies today.” The award letter describes Dr. Scapp’s latest book as “an excellent example of the type of scholarship, rigor and creativity that promotes and enhances ethnic studies.”

The book draws on themes that reach far back into Dr. Scapp’s career as a teacher, scholar, and philosopher.

“It originates from my doctoral studies from the 90s, when I did a lot of work on cultural theory,” he said, adding that, while on sabbatical to complete another book, “I saw the material in a new light when I recognized how much my work in ethnic studies has influenced my work in education.”

A Question of Voice has already served as a discussion text in a doctoral program at SUNY Stonybrook by Distinguished Professor of Philosophy Edward S. Casey, a well-known philosopher, lecturer, and colleague of Dr. Scapp’s who wrote the book’s preface. “He taught a few sections of the book before it was published and invited me to come and talk to the class,” he said.

Dr. Scapp is currently at work on a new book called Street Noise: An Urban Notebook. He describes it as “an attempt to look philosophically at urban studies and cultural criticism.” As an example, he cites one essay that deals with originality and authenticity, using New York City’s well-known chain of restaurants, all called Original Ray’s Pizza. “How can there be this many ‘Original Ray’s Pizza’ shops?” he wondered. In another essay on Gramercy Park, Dr. Scapp explores the idea of what it’s like to be an outsider. “It’s a digression from my usual work, in that I’m playfully exploring urban ethnography from a cultural theory perspective,” he said. He expects to finish Street Noise by September 2022.

“I’m honored to receive this award from the AES, an organization that’s actively working on the intersection of race, ethnicity, and social justice,” said Dr. Scapp. “I’m also pleased that an abstract notion of voice speaks to people working in the very concrete world of social justice. That the book has found a warm reception outside the philosophy field is especially gratifying.”

About the College of Mount Saint Vincent
Founded in 1847 by the Sisters of Charity, the College of Mount Saint Vincent offers nationally recognized liberal arts education and a select array of professional fields of study on a landmark campus overlooking the Hudson River. Committed to the education of the whole person, and enriched by the unparalleled cultural, educational, and career opportunities of New York City, the College equips students with the knowledge, skills, and experiences necessary for lives of achievement, professional accomplishment and leadership in the 21st century.