The Fishlinger Optimism Index™, a breakthrough measurement of public opinion centered on Americans’ optimism about the future from the Fishlinger Center for Public Policy Research at the College of Mount Saint Vincent fell from 59 in February to 56 in March ’18. 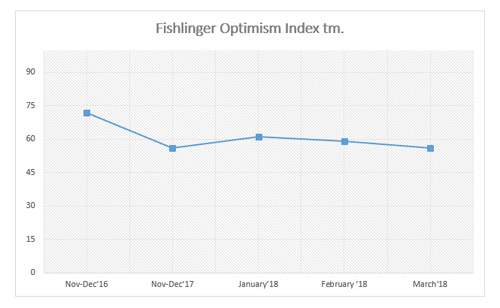 Optimism fell both overall and on key dimensions in response to unprecedented events. Interestingly, only National Leadership held steady perhaps in response to the strong international stand taken on Russian involvement in the London poisoning of a former Russian spy, as well as the recent trip of the North Korean head to China and planned visit to South Korea and possible meeting with President Trump.

Things started to unravel last month with the removal of security clearances for a White House aide and for the President’s son-in law Jared Kushner followed by White House Secretary Rob Porter’s resignation on charges of alleged spousal abuse.

In addition, Chief White House Counsel John Dowd resigned as the Mueller investigation expanded to include the Trump Organization. Also, the reaction of markets to the proposed tariffs on China was initially very negative. 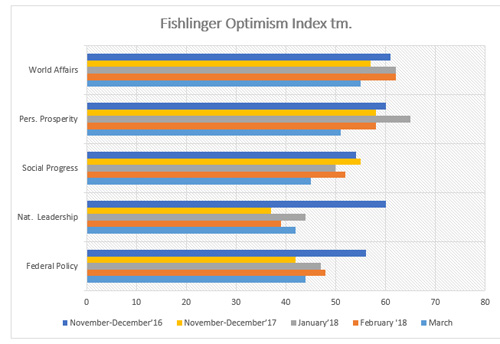 Then there were the allegations of marital infidelity and cover-up payments to former Playboy model Karen McDougal and Stephanie Clifford, aka Stormy Daniels, adult pornographic film star and producer. This was followed by a harassment charge from a former contestant on the Apprentice. The former has been widely covered in the media including television prime time interviews with Anderson Cooper on CNN and Sixty Minutes.

Finally, the thousands of gun control protesters in the March for our Lives undoubtedly had an effect as well. Quite a month.

In this study, the Fishlinger Center conducted online national surveys focusing on political issues in the United States. The fieldwork for the poll was conducted using a blended national panel form Survey Sampling, Inc. Interviews were conducted March 1-29, 2018. The credibility interval for 1,000 respondents is plus or minus four percentage points. The credibility interval is larger for subgroups and for differences between polls.