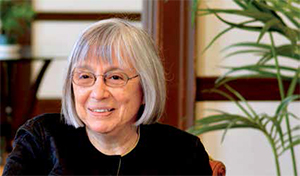 Mount supporters often speak about the assistance they received during their years on the Riverdale campus, and express their hopes for the same support being available for future generations of students. For one such alumna, her generosity seems only fair—a self-proclaimed obligation to share with others what she has been so generously given. Barbara Patocka ’68 earned her degree with the support of other benefactors who gave generously to the Mount to help students in need. Now she is in a position to do the same for the next generation of students.

As one of the inaugural members of the Centennial Society, Barbara has joined many other generous donors in making a commitment to planned giving that will sustain the College and future students beyond her lifetime. She recently visited the campus, where she took time to reflect on her time at the Mount, and what it means to be able to give back.

As a first-generation student from a family that often struggled to make ends meet, Barbara received a full scholarship to attend the College of Mount Saint Vincent as a freshman. The responsibility weighed heavily on her. “I was terrified. I was scared I would not do well enough to keep my scholarship. But it didn’t take long for me to undergo a transformation—instead of feeling that I was being tested and threatened, I began feeling that I was supported, and that those around me truly wanted me to succeed,” she says. “That support was key during my time at the College and has continued throughout my lifetime.”

Barbara’s experience was fundamental to her success, and even helped ease her transition when she decided to change her major. Like many undergraduate students who find it difficult to decide on a major when entering college, Barbara began her studies as a pre-med student, but soon felt the pull of other interests. In her words, she benefited from “very good relationships with faculty members who were a positive influence,” and she decided to change her major to one that matched her vision of the future—literature studies, which culminated in her B.A. in English.

There was still more change in store for Barbara Patocka. After graduation, she pursued graduate studies in English literature. Again, her widening interests led her to take a different path, and she decided to enter a career in finance. She blended both skill areas by taking a job at Institutional Investor, reporting on business and finance. From there she moved to the Mobil Corporation, later ExxonMobil, where she spent 25 years in a variety of financial roles.

Barbara’s story of change and renewal is indeed inspiring, and can be glimpsed in her ideals as a benefactor as well. Her advice for current and prospective students: “Take risks and find something that is really fulfilling for you and that you enjoy doing,” she says. “Don’t let yourself feel constrained by your background or educational experience, but believe that the world is open for you to do almost anything.”

Her hopes for future students are that they can have an experience as rewarding as hers. She believes that any student who seizes all the Mount has to offer will enter the world confident, well-prepared, and ready to take on life’s challenges.