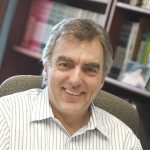 Dr. Hrubes is interested in how people use deception to achieve goals such as controlling their own emotions and influencing the emotions of those around them. His investigations include assessing the frequency with which individuals use these different types of deception as well as developing a reliable measure to assess people’s attitudes toward these types of deceptions.

Our impressions of others influence a variety of decisions including hiring decisions, personal relationship decisions, judicial sentencing decisions, and voting decisions. Understanding how people use the information available to them when forming these impressions is of considerable importance. Dr. Hrubes is also interested in how factors such as nonverbal behavior and motivation influence these judgments. He investigates these questions by combining theory from social cognition with practical information about the nonverbal displays that occur in real world settings.

Persuasion is a central part of our professional, political, economic, and social lives. Dr. Hrubes is interested in how variables such as nonverbal delivery style affect the success of persuasive appeals. Using a theoretical approach informed by current dual-process models of persuasion, he examines how the nonverbal behavior associated with persuasive appeals influences the mechanisms that underline attitude change. He is also interested in the interplay between values and attitudes in directing behavior. Understanding the relationship between general value orientations and specific attitudes and behaviors can help explain and predict a variety of important individual behaviors.

Hrubes, D., & Garcia, N. “Does Being Involved in White Lies Change the Way We Evaluate Them”. Eastern Psychological Association, 2020.

Hrubes, D. and Blum, A., “Hypocrisy Regarding Attitudes toward the Use of Emotion Focused Deception,” Eastern Psychological Association, Boston, Mass., 2008

Hrubes, D., Daigle, J. J., and Ajzen, I., “A comparative study of beliefs, attitudes, and values among hunters, wildlife viewers, and other outdoor recreationists,” Human Dimensions of Wildlife, 7, 1-19, 2002